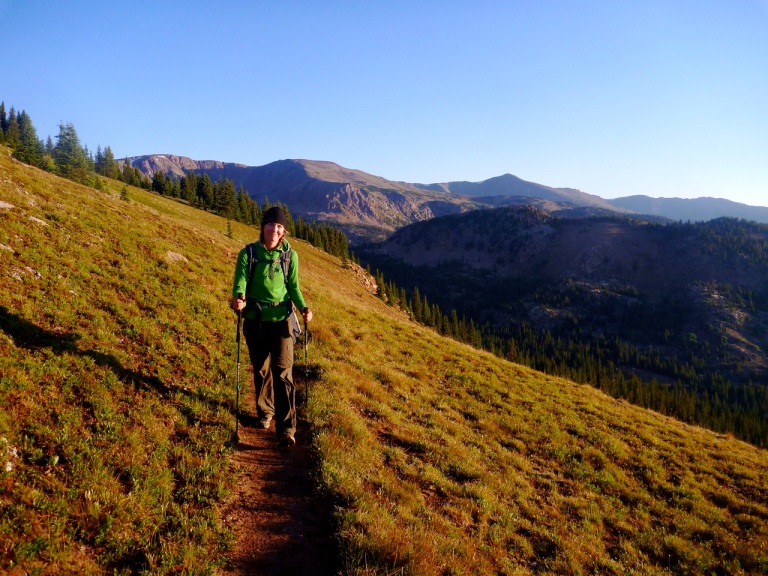 We hit the trail a shade after 6 am. The trail broke out of the woods into a wide open mountainside, where we were greeted by the dramatic site of two majestic elk spriting straight down the hill in the dawn light. They are, in every way, superior moving creatures to ourselves. We descended a gradual trail for a long while, which made for an easy start to the day. We were passed in the opposite direction by a handful of runners from the Leadville Trail Runners association, starting the day off the way I like best…moving quickly through the mountains as the sun rises. Be it on foot, bike or skis, this is the best way I have found to start the day, a better pick-me up than coffee, better for the soul than church, better for the body than a gym and better for the mind than an Ivy League college degree.

We moved into Leadville Trail 100 territory here. I've done the bike race portion of that event a handful of times, never doing particularly well, but building up enough memories that certain parts of the trail on this day took on special meaning. We did a stiff climb up Turqouise Lake to the top of Sugarloaf Mountain, a more direct route than the bike race route that ends at the infamous Powerline. The Colorado Trail took a long circumnavigation of Mount Massive in a series of undulating ups-and-downs. It was a bit of a mundane section of the trail, what with the massive and spectacular passes Georgia, Searle, Wheeler and Kokimo in our rear view mirror, and perhaps the first part of the trail where I experienced a little bordom.

The mental aspect of doing a long distance hike can't be ignored. You are walking a long ways, and sometimes the mind drifts. Actually, the drift is a good thing…it's when it doesn't drift that you are in trouble. A side of me wished I had packed along a tiny little MP3 player with an FM radio, and if we do the Continental Divide Trail or one of the other big three, I may. On the otherhand, part of the reason we come out here is to avoid this type of technology. It's a dillema – I'm well past the days of putting on my headphones for every workout and plugging in all the time and I truly enjoy the sounds of the woods and hills. Yet I also enjoy music, and it can add a new, symphonic element to the trail experience. And of course, help fight bordom. It's something I'll need to revisit and think about for my next trip.

On this trip we brought trekking poles, and I now can't imagine doing a hike without them now. We ended up going with the lightweight Black Diamond Ultra-Distance. They're great and save a massive amount of wear on the legs. The thing I noticed today, however, was that my pole straps are fraying badly, much more than Elaine's. Part of the problem is that I really push off the things, pretending in my head that I'm cross-country skate skiing, sometimes drifting off imagining I'm some Norwegian Olympic skier powering up a hill as the crowd cheers in the background. It's fun and good for the imagination, but my pole straps are suffering. They will not make it to Durango at this pace. A fix is needed at our next rest stop.

We got to something called Halfmoon Road, which began a section that circumnavigated the tallest mountain in Colorado, Mount Elbert. More often than not, the Colorado Trail does not go to the top of the biggest mountains, instead choosing to circumnavigate them on a lower route. This is major difference between the Continental Divide Trail and the C.T. The former goes right the heck over everything, while the C.T. takes a more sensible (usually) route. By doing so, the C.T. has a lot of variety, from alpine tundra to pine forests to sage fields and one of my favorites, the massive aspen glades of the eastern Sawatch.

The route from Halfmoon started up a long, switchbacked climb. Elaine set a blistering pace and I followed. We felt really good here, maybe the first time of the entire trip, and there was a discernable high when we got to the top of the hill…proud grins and a stoke that maybe, just maybe, we were breaking out of our funk. There were a ton of day hikers coming down from Elbert, none of whom showed much trail ettiquette. Truthfully, I'll take the long distance trucker mentality of C.T. hikers over the 14er crowd anyday. Nothing against 14ers, but you need to spend some time out here to slow the brain to the pace of the woods. There is a flow, and these folks seem to be going against the flow. There is something about them that is hectic. That's not an insult…it's more of a cry for them to go on a long distance hike. I think they'd love the experience. It's rich, it challenging and it's good for the brain. 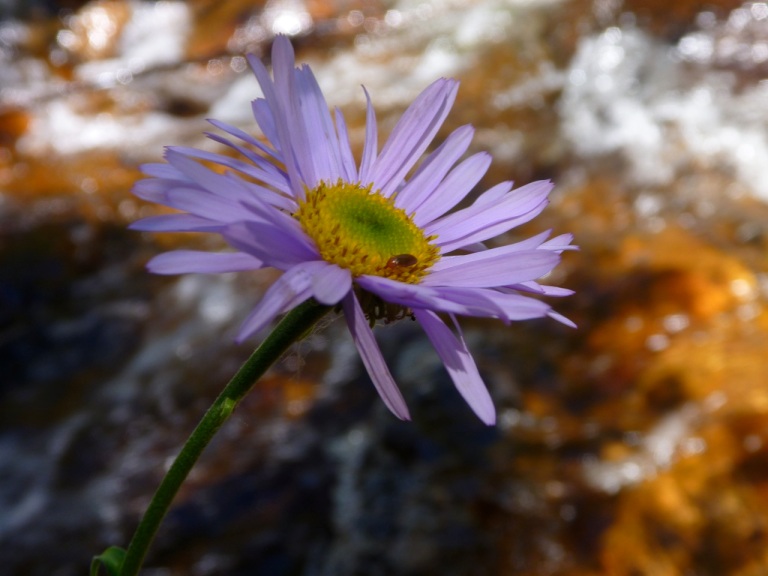 The section from Halfmoon to Twin Lakes is gorgeous. There are tons of aspen trees and lots of lakes dotting the land. Aspens are special – they offer a peaceful respite from the rest of the trail and whisper to you when even the slightest breeze hits. There is a section here, actually many, where we must return in late-September or early-October, when the aspens turn golden, with our mountain bikes. These trails are smooth and that would be a delectable experience.

While I'm normally super against carving names into aspen trees, there was something special about seeing carvings from 1955, 1949, 1938. It's neat to think of folks tromping along this exact trail so many years ago. What were they like? What were they doing? What did they talk about? Did this land look the same back then?

There was more trail magic on the base of Sugarloaf – kind of an afterthought one since we had experienced trail magic the day before – and I had grabbed a coke and stashed it in my pack. I pulled it out of my pack now at a rest break (a short break as the bugs were pesky) and we headed out on our final push to Twin Lakes. We had mailed ourselves supplies to the Twin Lakes post office, and there was some stress as to whether the post office was open or not. We hoped it would be, as waiting till 10 am tomorrow for it to be open would be less than ideal.

We took a cut-off down a trail with an arrow that said "Twin Lakes Village." This route was essentially an elevator shaft downhill that was not particularly friendly on Elaine's knee, especially after 25 miles of hiking and 6,000 feet of downhill. We made it though, and found out from a local that the post office was open for exactly ten more minutes! The post office was located in a sleepy general store, tucked away in the back the of the store. I found our package, signed with the store clerk for it and then headed out to find a place to stay for the evening. We found a great little cabin for a reasonable rate, complete with a kitchen. The older woman who owned the place must have taken pity on our sorry lot, because the price was way discounted and Stella was, according to her, "the first dog to ever enter the cabin."

While Elaine iced her knee and worked on her feet, I headed back to the general store, picked up some burger patties and ice cream, and we cooked up a feast. We organized our packs for the next three days, showered and enjoyed the evening reading and writing around the dinner table. We don't have a dinner table at home, so this space was nice luxury. Another thing I think I'd like in my future home – a table where family can convene, talk about things, laugh, play games, read, write, lay out maps and plan epic adventures. We will not have a T.V., but we will have a communal space where open discussion can happen and dreams can emerge.

It was a succesful past two day. We broke through our slump and have found a home on the trail. We enjoyed the cabin in Twin Lakes immensely, and we look forward to the next three days in the high Colorado Rocky Mountains.