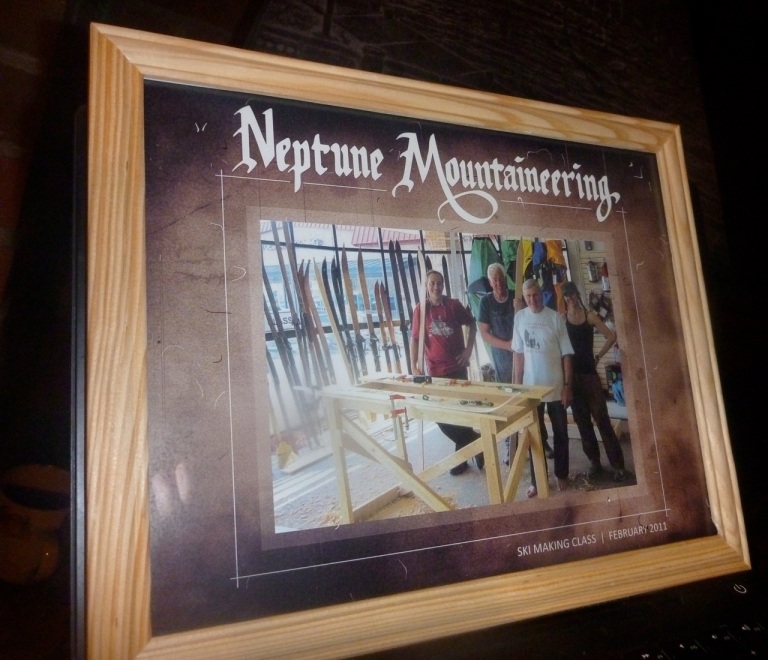 An early morning, as the caboose was freezing this morning and I felt the impetus to, instead of staying under the covers, get up and start a fire. We're near the bottom of the wood barrel, so that's a chore that needs to come to fruition at some point in the next 24 hours.

It was a long week of work. As Elaine was taking the ski building class, I changed my schedule around a bit so I could work too – if we're going to make the trip down the canyon it makes sense to make some money at the same time. Four ten-hour days is a lot, but not so bad. I got to ski each morning – which makes all the difference in the world. We have entered back into a snowy pattern, which I welcome. Yesterday was day 68 on skis and I plan to finish the month just north of 70. And then, I hope, a reverse from recent March dryness – I want it to snow, snow, snow.

Last night was an amazing one. I had to work till eight, but the owner of the shop I work at – which I dare say is the coolest outdoor shop in the world – had a little get together for the ski builders at his home. I headed over there a little later, joined Elaine, ate some salmon and basically basked in being in the home of a real-life Indiana Jones. Every corner of each wall was covered with a picture of a mountain he had climbed, or art work from Norway, Africa and around the world. On the cubbard, a pair of Sami boots, made of reindeer, curved toes and all. A reindeer skin from the same region. A stool made of an elephant leg – no, he didn't kill the elephant – it was bought at a thrift store in Africa. A photo – the last one ever taken, by Mr. Neptune himself – of Anatoli Boukarev, a legendary Russian mountain climber who minutes later would be swept away to his death in an avalanche. His books – oh the books. I could spend years reading them all – the history of skiing, of the mountains. Unbelievable archives that make you feel like you are 8-years old again and all the world is an adventure.

We watched a film, in Norwegian, about Sondre Nordheim, the man who invented modern skiing. The film is rare – the only place you get it is from a museum in Norway, and it doesn't even play on American DVD players. It was an amazing treat. Sondre revolutionized the sport, made the modern ski, contrived the first real telemark binding, and absolutely ripped on a pair of skis. And he was called an irresponsible odd-ball by the local townspeople, who, depsite their criticism, couldn't take their eyes off him when he skied. He was a magician on two sticks – 240 cm wooden skis, 97 at the tip, 75 in the middle, 87 on the tail, with willow bindings – and would always hold a fir branch in one hand while negotiating impossible slope, and a hatchet or a gun or some other work devise in the other. A quote that kind of hit home for me from the movie – he would go out skiing, well into his 50's, the best skier in the bunch, with a group of school kids. And the kids would say – he's more of a kid than we are! He never really grew up. What can I say – I relate to him in more ways than one. Gary told a story of when he went to visit Sondre's home in Norway, an old farming community way up in the Marka, how an old lady started cursing him out in Norwegian, spewing that Sondre was a good-for-nothing irresponsible loser who was a poor influence on the villages youth and that Gary was a fool for admiring him. Sondre was so disliked by the towns people that they raised money to ship him off to the United States for the sole purpose of getting rid of him. He died in poverty, in North Dakota, but he is a legend. In fact, if you are going skiing today, be it at the local hill or in the backcountry, you owe a debt of gratitude to Mr. Nordheim. Our sport would not be as it is without him.

There is so much stoke for this sport in our household right now. It's our way of life. Elaine's skis only need a bending, and we are going to build our own table to start carving handmade skis ASAP. She's going to teach me how, based on the skills she learned this week – very cool.

Today, besides wood gathering, we shall ski. An interesting fact from the movie – the word "Slalom" has Norwegian origins. Yet its meaning is very different from the images of racers we have today. "Sla" meant open slope. "Lom" meant fresh track in new snow. Today, we shall slalom – my wife and I, mountain people, the old school, Sondre Nordheim way.