It had been – and continues to be – an exquisite ski season. I think a lot of that has to do with my ski partner this winter. I suspect a lot of people might think it's not the coolest thing in the world to want to go skiing with my wife more than anybody else. I guess skiing is thought in some circles to be this "get out with the boys" type of thing, where the women stay behind while the guys conquer mountains. I did this for awhile – many years in fact – but I can absolutely say that skiing this year, with my wife, who also happens to be my best friend, has been much more rewarding. It's just…a chiller, more fun, more trusting experience. There is no stupid underlying competiveness, and I'm beginning to realize that sharing something, doing it as a team, is way better than the solo excursion. It's not that we're not getting after it, because we are. She's young, but she's just about as strong as the boys, and as her confidence continues to grow I feel like…well, we're going to roam a lot of mountains.

A cool day on the Red Lady the other day. You have to understand, coming to Crested Butte can be intimidating. Everybody in this town is a bad ass. In C.B., the passion to get after it and slay the dawn patrol is the norm. So when we left the trailhead at Kebler Pass to head up to the top of the lady (and I will write a proper blog about this mountain and the controversy surrounding it, because it deserves such), and there were four dudes in a truck next to us who had just returned home from Jackson and were spraying about climbing this and skiing that and how they climbed this thing a couple times a week, I think we both figured we'd be lagging way behind. An intimidating amount of testerone in the parking lot. 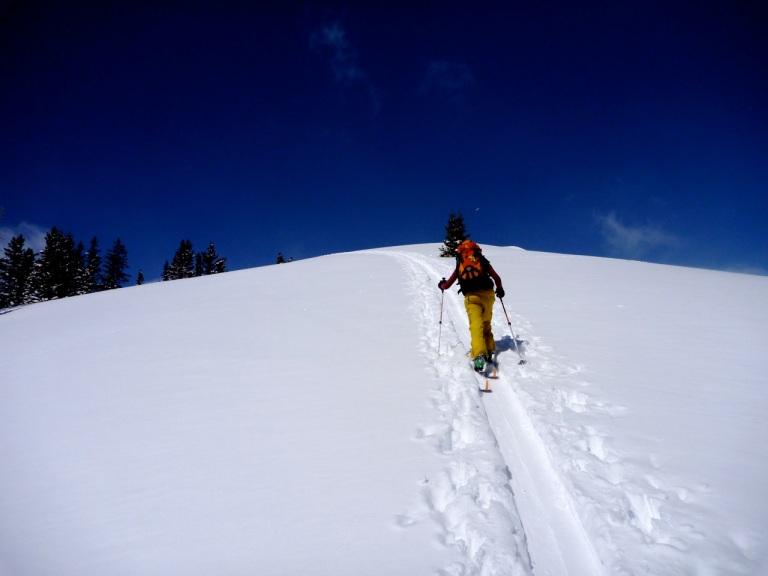 But then we started going up. And Elaine has a lot of pride, and I just let her lead the way. And man, it was like the coolest thing in the world, to see her just plucking along, quick stride, strong, and light. She's a natural going up. It was funny to watch. She caught those boys, and when they turned around and saw a 5'6" tiny framed girl going up the hill with a giant smile, pig tails waving, well you could tell by their reaction that they were surprised. For me…it's awesome to see. Elaine has always had a stoke for the hills, but three years ago around this time she was neck deep in depression and more likely to be found locked in her room than summiting a peak. As recently as last year, she had life-shortening meds pumping through her body. And now, she's med free, depression free, and rocking up a 12,000-plus foot peak, soul free and smiling.

We got to the top alone. And I'll be honest, it was a little intimidating. We don't have runs like that here. I gave her some basic instructions and then her watched her – after a tentative start – arc some nice turns right down the face. And when I skied down to her – well, the look on her face was priceless. Pure joy.  I asked her if that was the best ski run she had ever done. She corrected me, "no, that was the coolest thing I've ever done in my life." It wasn't said with ego…just pure stoke. 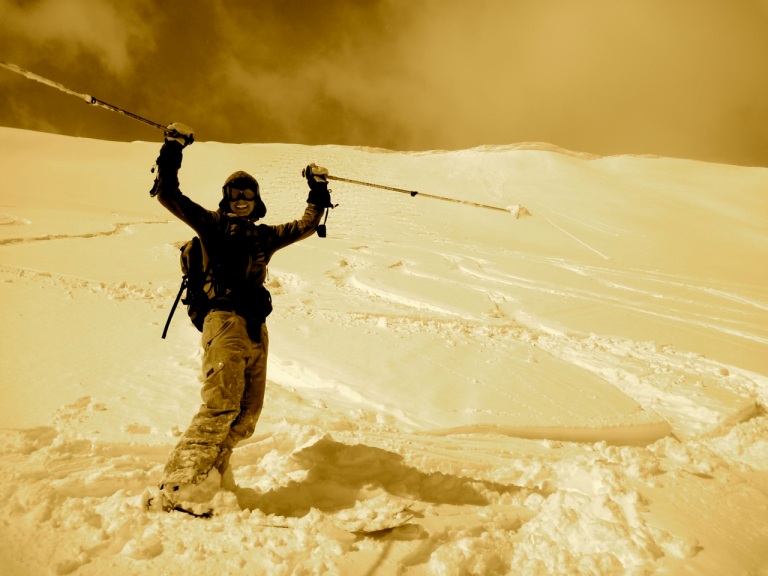 Skiing with the girl rocks. Way better than the boys. With her, it's not about skinning up hills faster or more days or better lines. It really has nothing at all to do with anybody else. That becomes irrelevant. It's all about personal fulfillment, the feeling of the wind as you stand on a ridgeline, the kindship to nature you get when you see a coyote track in front of you. With her, I feel that more than I ever have before. I look at it this way. The mountains are our cathedral, our church. They bring me great joy. Why in the world would I want to share them with anybody other than the person I love most? Share the best with the best.

To the local backyard: you are not perfect. It doesn’t snow quite enough, the wind blows the snow around, there are too many people and Boulder attitude is a bit much. But the thing is, I love this place. Because when you climb the mountains here, with the blasting divide winds at your face, winds coming directly from glaciers that are the remnants of a much wilder time, on the very spine of the North American continent, and you cross the 40th parallel of the planet every single day, you feel like for a second you’re doing something in a place that is so beautiful in its wild harshness, that it might even matter a little bit. Everyday, at least for a few seconds, I feel like I’m in Lord of the Rings, facing hardship and discomfort and then overcoming the hardship to hopefully come out a little bit better person on the other side. That’s kind of why we do the shit we do. This really ain’t no bougie ski resort. This is the northern Front Range, and there is an edge to it, and it’s perfection lies in all its imperfections. 🏔💨❄️❤️#home #skiing #ski #mountains #amundsensports #livesimply #northernfrontrange #fjallraven @elainevardamis #dronephotography
Somewhere up there in those mountains that @elainevardamis is heading into in this picture, a 27-year old man disappeared about two weeks ago and hasn’t been found yet. The day he headed out, February 3rd, it was a warm morning, but by 1 pm a ferocious cold wind and snow storm blew in, and it hasn’t really relented since. By that evening, as search and rescue rendezvoused near our home, it was a full-on blizzard and our home shook in the wind. Above timberline, in these conditions, it would be devastating, and incredibly easy to succumb to the elements. It’s a sad, humbling story (though we all cling to some hope he is somehow alive), and proof that these glaciated mountains, close as we may be to a major metropolitan area, are wild and unforgiving. Yesterday we skied to the turnoff of the drainage they think he’s lost in. Not a trail had been broken, just deep snow, avalanche terrain and winter at her most ferocious. It felt lonely and forlorn, and it made us want to venture into it, with a strong crew, to break trail and see if we can find him. #mountains #lost #wild #hope #winter
Nobody I’d rather ski around the winter woods with on a -10 degree F Valentine’s Day than life partner-in-crime @elainevardamis - cold air but warm hearts (and wood burning stove)! ❤️🎿❄️☃️#winter #cold #skiing #snow #åsnes #amundsensports #valentinesday2021 #mountains
Closed out the month of January and celebrated our 80th day skiing of the season in the best way possible - a night nordic ski tour away from people. No sense getting down about a low snow year...you can have a hella lotta fun on a “below average snowpack.” Best of all, the three (and sometimes four) snowiest months of the year are coming up! Location: 3 miles from the spot of the snowiest 24 hour bounty in the history of the lower-48, 75 inches at Silver Lake, April 14, 1921. Let’s have a repeat! 🏔⛷💪#skiing #nightskiing #nordicskiing #åsnes #amundsensports #getoutside #getoutstayout #snow @elainevardamis
The next full moon is the Wolf Moon, my favorite moon and my favorite animal. Beautiful night tonight at 9,000 feet, air still, not a human out, valley echoing with with the cries of a Great Horned Owl. Five miles to the west, the storm begins to brew and the biggest glacier in all of Colorado grows. Even in a low tide year, we are blessed. This mountain life, it’s a good one. 🌌🌲🏔❤️#mountains #rockymountains #continentaldivide #fullmoon #winter #january #night #hygge
The real insurrection isn’t happening at the Capitol (those “patriots” are fucking lunatics and cowards), but instead in the woods, where we’re bound and determined to make America compassionate, equal, healthy and wild again, one kick and glide at a time. 🎿🏔🌲🌌#skiing #ski #nordicskiing #crosscountryskiing #nightskiing #getoutside #getoutstayout #amundsensports #åsnes
Sunrise in the valley. 🏔🔥❤️#sunrise #sun #morning #snow #winter Music by @coldplay
This life we live is a little mundane. Some days, most days really, I want leave it all behind with @elainevardamis, strap on the skis and head north towards Canada and see how far we can get. And then, just keep going. But alas, there are sore toes to help and boots that are too tight that need fixing. More than that though, friends.🎿🏔❄️#skiing #ski #nordic #woods #mountains #sunset #alpenglow #amundsensports #åsnes #fjallraven
Ending 2020 and starting 2021 skiing in the wild mountains with friends and family. Feeling an abundance of love and community lately. Can’t really ask for much more in life than that. I have a sneaky suspicion 2021 is going to be a great, great year. 🎿🏔❤️🥂#happynewyear #skiing #ski #nordic #nordicskiing #wild #wilderness #amundsensports #fjallraven #getoutside #getoutstaryout @elainevardamis @squidleaderj @l_bellian @lilafiler