This April has been quite the month for snow lovers. Everyday it seems for the past two weeks, it's snowed a couple inches during the day, more at night, and been foggy, wet and cold. Nederland and 8,000 feet above sea level seems to be Ground Zero between spring and winter, which means just a little big higher, where we actually ski, it's been winter. I have to admit, I was a little burnt on skiing for a bit there, but this latest storm cycle has the season ending on a stoke. I don't know how long this can go on, but it's unlikely to be more than a few weeks more, if that. The sun is high – mid-August high right now – and the snowpack doesn't survive high pressure systems this time of year. There was one year, 1995, where it snowed right through May – I remember doing the Iron Horse Classic Road race down in Durango and getting marooned on the top of Molas Pass in a full on snowstorm…on Memorial Day…but that was a unique year. Unless we're in for another May of freak-a-tude, the end, at least down low, is near (up high I expect the conditions to be quite good on, say, July 4th!).

So what's a skier to do – go skiing as much as possible and ride the wave till it breaks. Elaine and I are ready for spring when it comes – meaning the mountains bikes are tuned and ready to roll for the inevitable warm-up – but we're enjoying the moment. Here's the breakdown of this winter:

It's already been a good year, and it's ending with a flourish. Today Elaine, Stella and I headed up to Caribou to check it all out. Absolutely a ton of snow up there…the most I have ever seen. The drive up was wet and greasy (next year I need to invest in some real snow tires), but the skiing was divine. Around 11,000 feet, the snow was light and powdery.

Back at it tomorrow morning for day 118 on skis. Despite what some of us might hope, it's not an endless winter, and that's what makes it so important to get out as much as possible, right now, while the perverbial iron is hot. Or, in this case, cold.

Hard to believe it's almost May. Skin track to bliss.

The ski dog, known as Stella. Next year I'm definitely selling the BCA becons and getting the new dog system from Pieps. And then continuing to ski safe terrain with her, despite the extra precautions. What can I say, she's family. It's been a grand ski season for her – of my 118 days, I'd say only 15 to 20 were at the resort, meaning the rest were backcountry. When we ski the B.C., Stella comes along, so she must be somewhere around the century mark for the season. 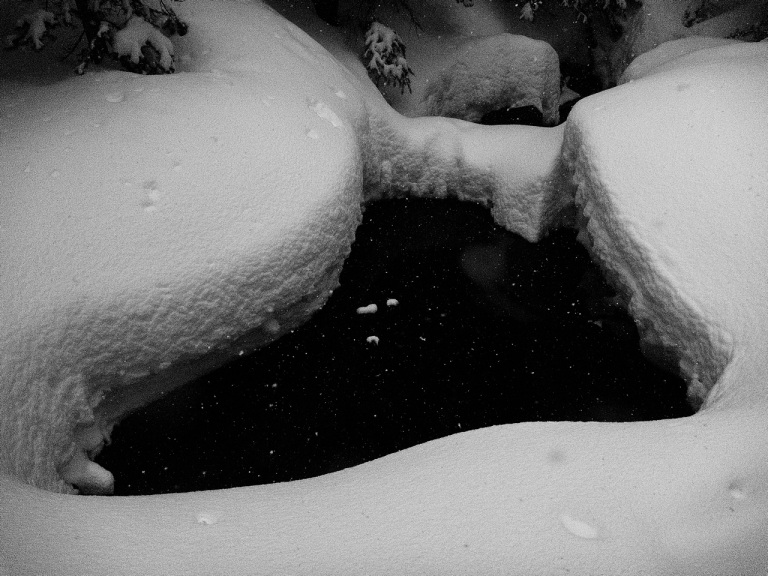 Elaine shot all these black and white ones. She calls this one, "Into the Abyss."

Yours truly trying not to fall into the Abyss and look non-chalant at the same time. Wow, that's a lot of snow.

In a world of black and white, these two girls would be my color.