I felt quite tired this morning after last night's storms, but there was no time to rest as we needed to at least get near Marshall Pass – a very high Continental Divide crossing – before the afternoon thunderstorms rolled in. The weather has completely shifted from a week ago…we've gone from drought to monsoon overnight.

Immediately upon departing we headed through perhaps the most magnificent stand of aspen trees I've ever seen at a place called "Lape Meadow. This would be an absolutely terrific place to expore in early October. These are some of the finest leaves anywhere in Colorado.

We headed down anothr big ridge from North Fork Creek and then back up some of the finest built trail we've encountered yet. It had a nice manageable grade, was smooth and just flowed. My friend and old IMBA co-worker Tony Boone lives around these parts…he's well known as one of the finest trail builders in the world. I wonder if he played a role in building it?

There are lots of weekenders out on this Sunday morning. My goodness the stuff they bring out for a little weekend camping trip! RV's, ATV's, coolers, fishing gear, stereo systems, tables, chairs and so on. It's a bit much in my book. It seems this scene is always accompanied by a yapper dog in their presence – it kind of feels like Stella is royalty by comparison.

We headed under some large powerlines and across an old rail line to Highway 50. To me, this is the true division between the north and south sections of the Colorado Trail, and a marker of some significance. We crossed Higway 50 and noticed a bunch of cars and vans waiting for thru-hikers – family members who were there to provide support, encouragement and food to their family on the trail. It was honestly a bit of a tough moment for both of us, but especially Elaine as I think a 0.1% side of her held out hope that maybe her family would be there to greet us, but alas it didn't happen.

We walked in silence for quite some time, but were soon brought back into a cheerful mood by something called the Fooses Creek Trail, which joined the Colorado Trail for this section up to the divide. For some reason my 2003 bike crew skipped this section, and that was a serious mistake, as this was some of the nicest trail we've encountered yet. It was incredibly lush – there were ferns on the ground, which reminded me of the forest where I grew up in Vermont. We lived in a house under a huge grove of lodge pole pines that whispered when the wind blew. Beneath the towering trees was a bed of thick, beautiful ferns where  I spent a lot of time exploring. This section of trail reminded me of home.

The route continued through pine and aspen forests, fields with flowers and rippling creeks. We passed a guy who lost his two dogs on his day hike. We eventually saw his dogs further up the trail, running around all crazy-like while he was calling at the top of his lungs. It was a real gong show to be honest and left a sour taste in my mouth. We're pretty lucky Stella sticks so close by and doesn't pay wildlife, other dogs or people a second notice. Heck, a squirrel could run three inches in front of her nose and she's just like, ah, whatever. She's no wimp – she was part of a sled dog team in her previous life and is missing one of her fang teeth, I'm assuming from a fight. On the rare occassions when she has been charged by overly-ambitious dogs she – with almost scary efficiency – has them on their back whimpering as she pins them. Yet she never bites them. I've seen her pull this trick with dogs twice her size. The conflict is over, without exception, in about two seconds time. Yet she never shows any aggression towards another dog unless seriously provoked. In regards to wildlife, she ignores deer, moose, coyotes, elk, rabbits, marmots, squirrels…you name it. She simply doesn't care. It's a real luxury for us on the trail.

We hiked onward. We were coming to decision time. Clouds were building up rapidly just as we reached timberline. The choice was to stay in the woods and wait it out or go for it and hope for the best on a long, exposed traverse above timberline. There were still patches of blue in the sky and we hadn't heard thunder yet, so we opted for the latter. Our goal was to at least try and make it to the Green Creek Shelter, two miles away. 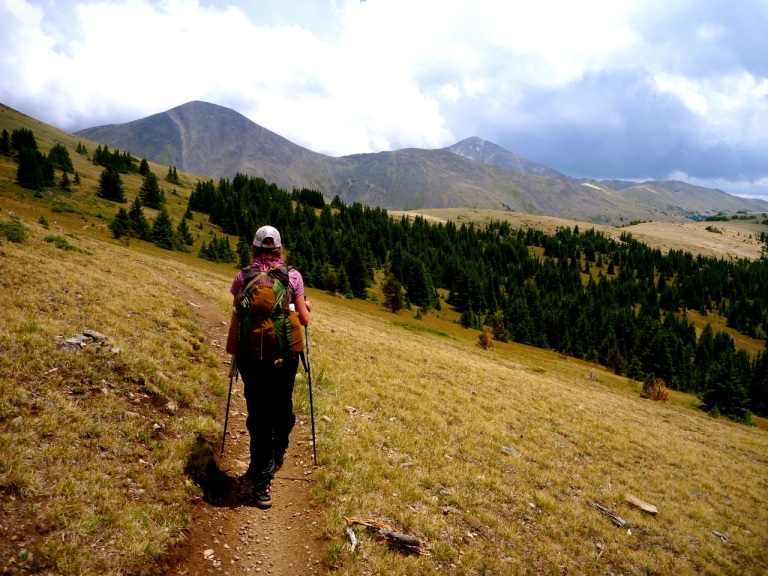 The huff up to the divide was brutal, made more so by a crowd of bikers heading down the same section and the fact that we had opted to wear our sweat-inducing rain gear. We gained the divide, shedded the rain gear, and made our way south. It was fairly clear but there was no time to waste…clouds were building in a towering fashion in every direction. Nevertheless, this was beautiful trail and there was a certain euphoria to being on top of the continent, above timberline, moving fast and light.

The hike to the shelter was a relative cruise. We were happy to find the shelter – a three-sided lean-to – unoccupied. After some hemming and hawing we decided to spend the night here despite only hiking 17 miles today. I figure we're exactly 40 miles from our cache at Cochetopa Pass, and should be able to make that fairly easily in two days time. A good nights rest and a shorter day, not to mention lighter packs as a result of food we eat tonight, should certainly help out in the upcoming section, which is notorious for having almost no water.

As if to confirm our decision a massive rain and lightning storm moved in and hasn't stopped for the past hour. We're glad to have a dry roof tonight before moving on. It's downright cozy, and it's a good part of the thru-hike experience. These type of shelters are everywhere on the Appalachian Trail – every ten miles or so – but this is actually the only one not only on the entire 485-mile Colorado Trail, but also on the 3,000-plus mile Continental Divide Trail. The walls are carved everywhere with names of thru-hikers like "Raven," "Nomad," and "The Eagle." Next to their names are accomplishments – "AT 2003, PCT 2004, CDT 2007."It's a part of thru-hiking history, a veritable hall of fame.

The thru-hiking scene is such a small segment of America it's almost insignificant. Yet it makes me happy to know that there is a small yet important segment of our population who are choosing to take to the trail and walk. Adventure, self challenge, appreciation of the natural world and exploration still exist – albeit in small doses – in a society that really places little emphasis on these things. It gives me some hope for our future.

I'm psyched to cook dinner, take a nap, listen to the rain fall, write, read and settle in for the night with my wife, the most amazing woman in the world. 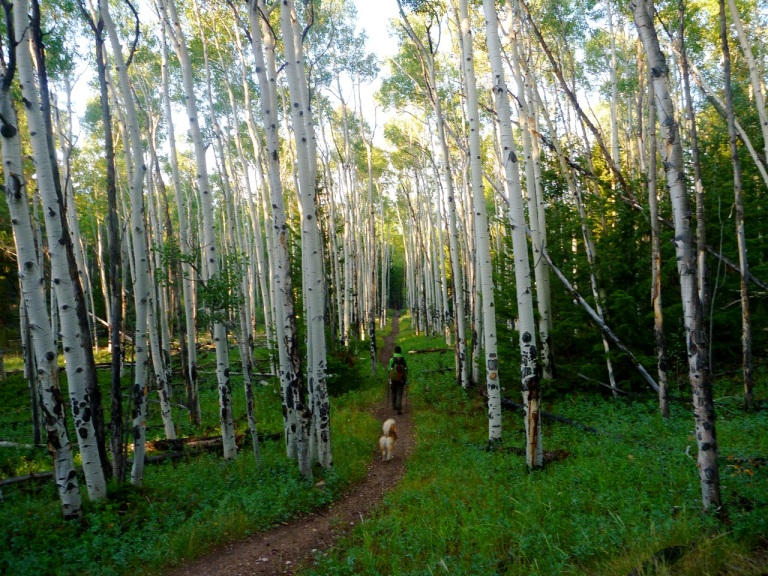