After yesterday's trials we didn't know what to expect today. All our clothes were wet, so we each started off in long johns, our Ibex wool top and wind gear. Our plan was to keep these layers on until we warmed up sufficiently to put back on the wet clothes. Our sleeping bags were also a bit wet too, and we started off the morning feeling a bit shelled.

We climbed back up to the trail and immediately noticed the tracks of the horses. The tracks eventually led all the way up to Blackhawk Pass, Straight Creek and beyond. I have no idea how they managed to get up and over that pass last night without dying. They just clearly wanted it more than we did. Elaine told me this morning that she also saw a couple hikers heading up and over the pass, straight into the double lightning strike, just as we decided to pull the plug on the day.

We were quiet during the first part of the hike. It takes a little bit to get back in the groove after a day like yesterday, and I think we were both focusing on the moment, on each step, to get the necessary confidence back. We followed the horse hoof prints straight over the pass – those Black Riders truly were insane – at which point our collective mood improved significantly. We arrived at Straight Creek, our planned destination for yesterday, about two hours into the day. I'm glad we stopped – it would have been a heinous two hours last night with potentially deadly consequences.

As Straight Creek was reportedly the last water for 20 miles until Taylor Lake, we opted to fill seven liters of water (six for us and one for Stella) and made our way down to a muddy jeep road below that marked the official end to this segment of the trail. The Colorado Trail guidebook divides the route into 28 manageable sections, divided by roads that provide access.

The new section began with trail across a hilly bench that I remembered it quite well from our bike ride back in 2003. The portion of the trail from Molas Pass to Durango is quite popular with mountain bikers, but strangely enough we didn't see a single biker on this day. There were some big descents after Blackhawk Pass, and we kept anticipating the bike crew would come zipping past us, but it never happened. We did see their van occassionally at the many road crossings in this area, waiting for them in support, so I suspect they were never too far behind.

We passed a massive campsite with gas cookers, huge canopy style tents and tables. I think both Elaine and I secretly hoped it was some deluxe version of trail magic, but alas it was not. The trail scooched through some old logging parcels and then benched into a gorgeous, enclosing pine forest that offered smooth, easy-going travel. 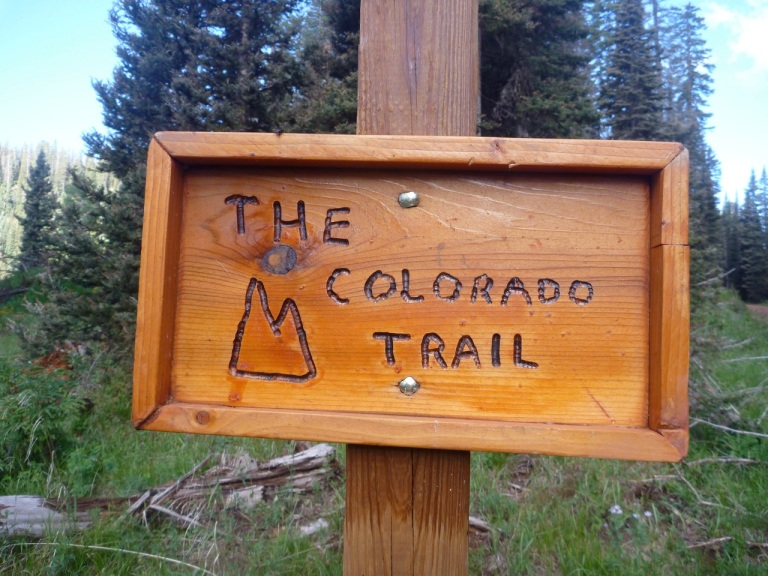 Given the easy trail, my mind drifted. I thought back to my first backpacking trip, to a lake in Norway. I remember deep woods, clear, cold water, fresh. butter-fried trout for dinner, a blue tent and a feeling of pure joy. I thought back to a backpacking trip in Minnesota, when I ditched a Boy Scout camp dedicated to merit badges and other such foolishness and signed up for a backpacking trip into the north woods surrounding the headwaters of the Mississippi River. It was hot, humid, the bugs were vicious and I suffered. But when I got back, I felt like a hero. I remembered waking up in October in my 4-season, LL Bean tent on the North Dakota badlands, the ground frozen and a light snow covering the gnarled landscape of the Little Missouri River. I remember looking west from a plateau and feeling like Lewis and Clark, the first white men to that land, ready to explore the unknown. I've come to realize that I'm meant to explore, and after a long hiatus where I tried to be a teacher, a professional, and do things other people thought were right for me, I'm finally doing exactly what I want to be doing. That I have found the perfect partner to do it with, and that she happens to be my beautiful, talented wife, is beyond a good stroke of luck.

This business of walking all day…we like it a lot (or in the winter
backcountry skiing). Already we're scheming for ways to do the Pacific
Crest Trail, the Appalachian Trail, and granddaddy of them all, the
Continental Divide Trail. I believe that combined with writing, and
publishing books we could turn it into a sustainable thing.  Do what you love,
and success will follow.

And what after that? The trail changes priorities and perspectives, and you have a lot of time to evaluate the future. We want a family for sure, but it would also be nice to give back to the land. Could we both do something that helps teach the next generation respect for the land and
the animals that live on it? The wilderness has given us so much, and we want to back to her. What else? We
want to live in a yurt somewhere in a wild, mountainous country. Why a
yurt? Because we want to be warm and secure, but not separated from
nature. We want to feel the wind on the canvas, we want to hear the
pines whispering in the breeze, we want that connection to the
outdoors.  Our goals are distinct but relatively modest. A yurt, super
well set up, costs about $10,000. Land will be tricky, but the
possessions we need are few. Good gear, skis, warm blankets, a few basic
utilities, something that will allow us to be creative and produce art
and books. It's all possible. When we get back, it's time to do it and
not just dream it. 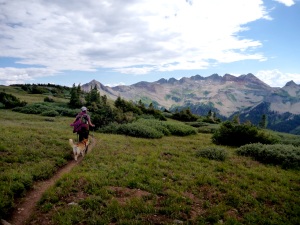 It was a splendid day of hiking. The weather was clear and it appeared the afternoon thunderstorms might even hold off. Would this be an end to our seven straight days of rain? We headed out of the serene forest up a ridge towards the last big obstacle of the trip – Kennebec Pass. Kennebec separates the San Juans from the Durango desert, and at 11,000 feet it's not an insignificant obstacle.

We climbed towards treeline, and were faced with decision time yet again. The clouds were building but there was no thunder yet. Ahead laid the unknown, an above timberline four mile long stretch to Taylor Lake. We evaluated the clouds – they seemed thin – so we went for it. We headed up a steep series of ledges where the wind whipped in from the west. Far off in the distance, I saw the La Sals sillouetted against the horizon. The La Sals are near Moab. We'd basically walked from Denver to Moab. That impressed both of us, and made the whole trip seem grand in scale.

The wind was really blowing, so I had to hold my cowboy hat on with one hand. As a result, I stumbled on a step up a steep ledge and "SNAP," my pole strap, that had been wearing thin since day seven or so, broke. So close to the end! Ah well, perhaps a stop gap solution could be found in camp. Hiking 450 miles makes a person adaptable and at times slightly ingenious. It would be alright.

We were, however, both feeling quite tired, so it was with no small relief that we made our way to the top of the talus covered ridge, looked down, and saw the emerald gem of the San Juans – Taylor Lake. We made our way down an exceptionally steep trail and circumnavigated the lake in search of a suitable camping site for our last night in the wilderness.There were already a couple campers down there, including the couple from San Luis Peak who must of snuck past us while we were eating up a storm in Silverton. We found a nice patch of ground, unpacked our gear for drying, and enjoyed the last rays of the day. 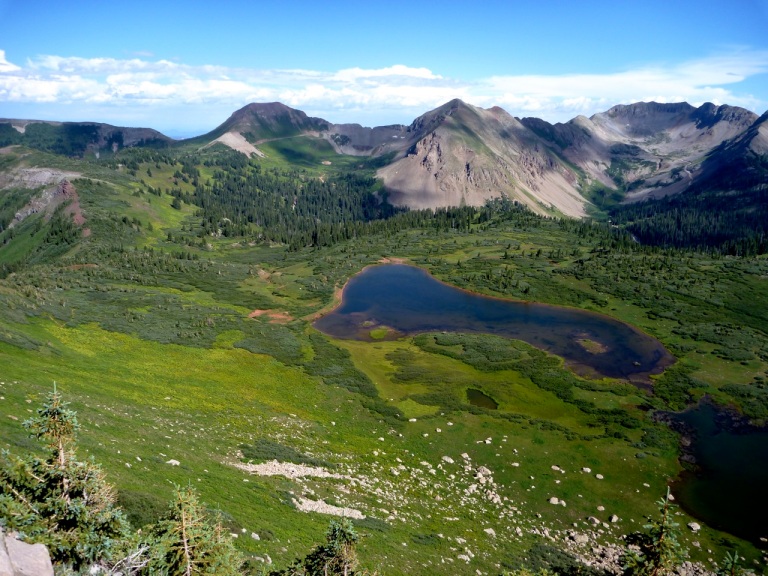 There was not a cloud in the sky so we decided to sleep out under the stars. We cooked a scrumptious meal of pesto pasta with extra cheese, enjoyed two luxurious cups of tea each and ravished a last night treat, a Backpacker's Pantry dessert of cheesecake. The wind was starting to pick up so we decided to wrap our bags up in our tarp, which was a mistake, as the condensation created soaked our bags thru. Fortunately it was the last day and didn't really matter.

One thing we hadn't seen much on this trip was stars. We'd always been too tired to bother looking. Tonight was the exception. The stars, the constellations, the deep galaxies, the shooting stars, were all magnificent. It was great place to be on our last night out. Elaine lamented to me, "I'm sad to see it ending." Me too. It'll be hard to go back. Life is simpler, richer, cheaper and better our here.