It was a cold morning with a heavy mist and tons of condensation. We got cold last night, so we arose at 1 am to secure the tarp lower against the wind and mist. It was a gorgeous morning hike over the Continental Divide. Looking over to the mountains of Summit County was awe inspiring, and even more impressive was looking east to the rolling hills where we just came from. 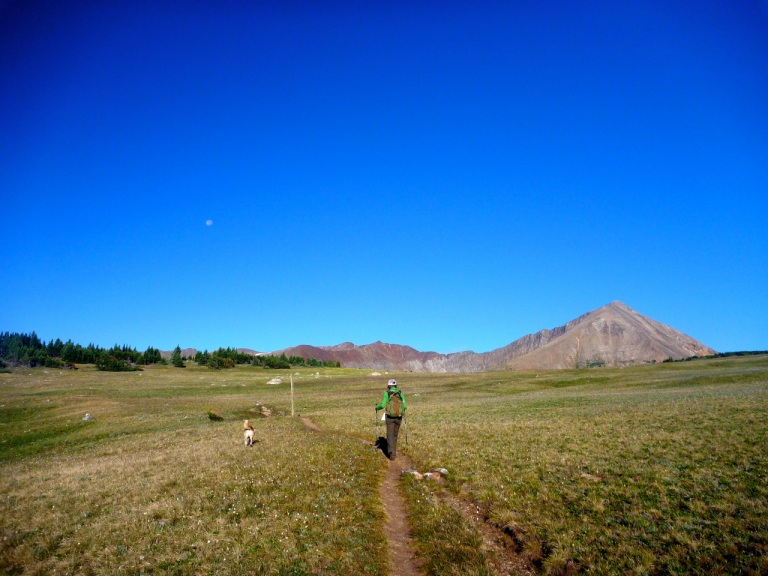 It was a long, long hike down from Georgia Pass to Swan River and some of my old Montezuma's Revenge stomping grounds. We passed through an area near the bottom of the pass that struck me as quintessential old Colorado – creeks, pines and mountains. The image of this place will hopefully stick with me for this lifetime.

We passed a sled dog outfit, but Stella seemed thoroughly unimpressed. Been there, done that perhaps? We passed a campsite with blaring music while they all lounged around in pajamas. Nothing against pajamas, but why don't they just stay home if they need all that stuff? We headed onto a long climb and a section of trail frequented by a plethora of mountain bikers. We got passed by a guy and a girl riding mountain bikes at the bottom, but we caught them at the top – they seemed impressed. This was perhaps the most pleasant Summit County interaction that we had the entire trip.

We ran into a bunch of riders – let's just say some were more polite than others We made a decision to hike quicker than normal so Elaine could head into Breckenridge and get a new pair of shoes before closing time. Near the bottom of the descent, we passed a nice guy thru-hiking with his dog. It was cool to see another dog out there. Most folks seem fairly incredulous that we would bring a dog along, but the truth is Stella's breed – the Alaskan Husky – is bred to do multi-day trips. Honestly, she'll probably be stronger than both of us.

A huge thunderstorm rolled in and with it heavy, heavy rain. We both got fairly soaked, especially the pants, and I have to admit we were both a bit annoyed as it was so close to the resupply and we didn't want to get cold while we stood around taking care of that.

The rain abated and we found our cache no problem. We loaded our garbage into the cache and stuffed our packs with new food. As we headed down to the road between Frisco and Breckenridge, the lightning started going nuts. Traffic was extreme. When the bus came we were greeted most rudely and told we could not enter because of Stella. It seemed a bit heartless as lightning was striking all around us with basically zero time between flash and boom.

We elected to stay in the bus shelter for a moment to avoid death by lightning. We got bored with that so we started walking down the bike path to Breckenridge. Aware that time was of the essence, we decided to have Elaine catch the next bus to town while I would walk the extra four miles into town. We kissed goodbye as the bus came and then she was off in search of shoes.

I felt a bit lonely on the walk, and wasn't thrilled with the long paved section with a million cars zipping by ten feet away to my left. Upon arriving in Breckenridge, I ran into my former IMBA boss Jenn Dice – apparently there was some mountain biking festival in town. I failed to let her know that perhaps IMBA needs to up its education of cyclists, as most of the mountain bikers on the C.T. in Summit County were quite rude!

It felt a bit odd walking through town with so many tourists, many of whom apparently thought Stella was a wolf. I did a brief search for a book to replace my Kindle but Breckenridge is evidently devoid of bookstores. I ran into Elaine and she had more luck than me – the folks at the Patagonia store sold her a pair of trail runners for 40% off and gave her a new pair of socks. Score!

Meanwhile, the rain continued to pour and we were soaked to the bone. Darkness was coming. As such, we caved in and paid $190 for the "last room in town." We scarfed a pizza and failed to sleep much in the stale, still, stuffy room. According to the T.V., the monsoon season began today. All in all a mixed day that ended with a foray back into civilization.

Day 5 campsite location was a condominium in Breckenridge. Apparently the famous reggae star Ziggy Marley was staying there too. 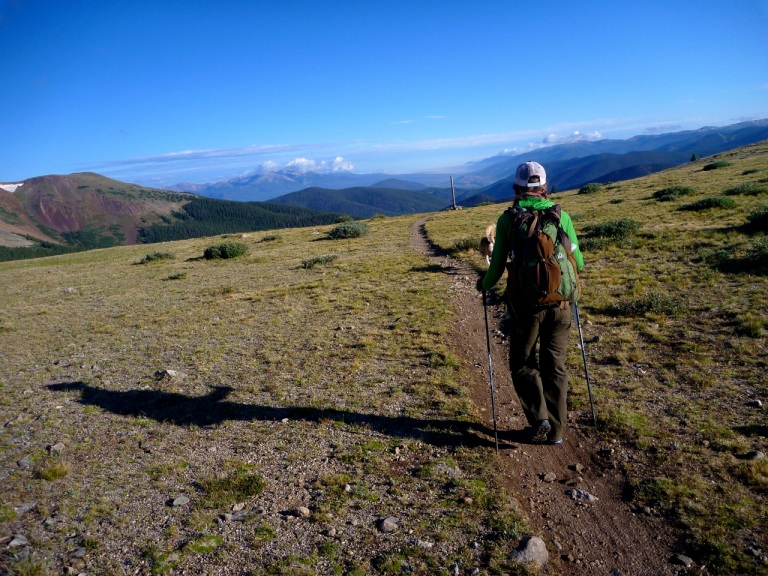 3 Replies to “Day 5 on the Colorado Trail: Georgia Pass to Breckenridge”