Sunrise this morning from the window near our writing table.

After six straight days of work – and a fair share of stess – today is a much anticipated respite. Our snow situation is still grim, but this year, for the first time in a long time, Elaine and I both have ski passes to Eldora. It's going to be a homecoming year of sorts, as we've spent a lot of time up at this mountain.

Eldora is a good little place. It's certainly got its quirks – gale force winds and a strangely non-responsive-to-new-ideas management at the top of the list – but the pros outweight the cons. There are great trees on the "back bowls", the nordic area is as good as we could hope for and there are actually some cool options for front/side/backcountry loops that are almost never used.

Today will be our first day at Eldora, a handful of early morning turns on the machine white-strip-of-death before the race teams turn up and the place becomes mass chaos. It's been a slow start to the ski season. Last year I'd logged 12 days by now, this year just six…all nordic. We simply don't have enough snow on the standard skin routes to make them useable. Patience though – another storm is coming next week and before all is said and done it's going to be a good and maybe even great year.

My goals for this season are a little different from last. Last year it was all about days, which was unfortunate because our season petered out very early. This year we're more about quality. Elaine and I are dabbing in the Colorado Ski Mountaineering Cup, a series of uphill and downhill ski races around the state. We did a few at the end of last year, the Power of Four and the Elk Mountain Traverse, and had a lot of fun with them.

Despite the fact that many of the races are individual in category, we're planning to maintain the true ethos of backcountry skiing and race in tandem. Afterall, why would I want to travel hundreds of miles to ski without my favorite skiing partner in the world? Makes no sense, and if it means sacraficing some places in the results, so be it. I'm excited…first race is in just over two weeks, up at a place called Lake Irwin deep in the Elk Mountains. Here's a picture of the race profile, which is a little daunting seeing as we have not skinned once this year. 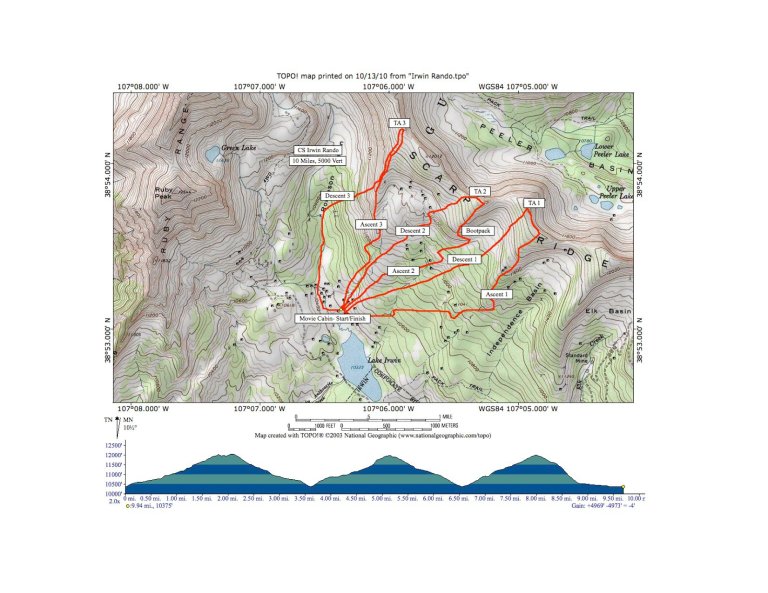 Nothing like 5,000 feet of climbing off the couch, eh? Well, I guess not really off the couch, as we've been mountain biking and hiking and running a fair bit, but still. Ah well, it'll be good to get the first one going, work out the kinks in our gear and hopefully ski a bit of powder down in the Butte!

After the Irwin race we're going to January races on the Western Slope and then back down to Crested Butte and Monarch. We're planning to skip some shorter races in February to prepare for a big ski project in early March that is definitely ambitious in nature and a highlight of our season. More on that later, althought not too much more as we're keeping it on the down-low till we've actually done it and have something to talk about. Better to be humble and stealth than cocky and loud.

We'll wrap up the season with a late-March and early-April flurry, with the Five Peaks Challenge in Breckenride, the Elk Mountain Traverse from Crested Butte to Aspen, the San Juan Grind and the season finale at A-Basin. We might try to enter a smattering of nordic races too. Hopefully there will be a handful of hut trips with friends tossed in for good measure and plenty of awesome adventures on a regular basis. It's all attitude – plan to have a great season and you will!

I've been dabbling with a little ski work project the past few days. I've got a lot of skis in the quivver, but they're not all new. I like to mix old friends with new ones and some skis simply have a lot of sentimental value. My SkiTrab Duo Sint Aeros fall in this category. They're uglier than sin, but they are probably the best adventure big day ski I own and have taken me to a lot of high and happy places on otherwise dark days. Super light, they ski exceptionally well, made in Bormio, Italy. Plus, the model is discontinued and you haven't been able to buy them in North or South America in the last half-decade.

Problem is, they've been mounted a few times and the drill holes are making it challenging to find places to mount them. The holes need to be strong – losing a ski on 40° icy couloir isn't really an option. I did some research and discovered that a concoction of JB Weld and Steel Wool is a reliable material for bringing old holes back to life. Makes sense, as the stuff is used to keep engine blocks in cars together. Thankfully our landlord has a bunch of tools, sanding material and JB Weld, so I went to work on the skis the past few days, fixing the holes and then remounting the bindings in the garage using old holes. 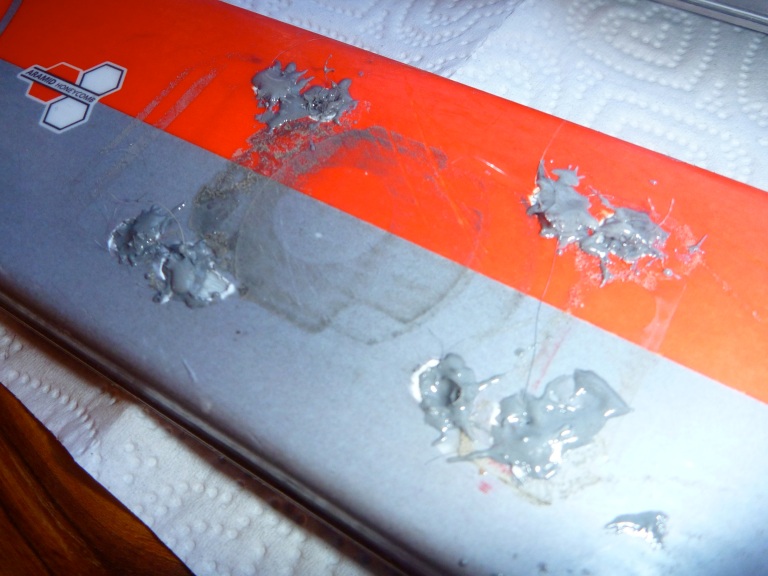 Bottom line, they feel solid and look good. I tossed the same concoction together for Elaine's rock skis, which have more holes than Swiss cheese. It feels good to take something old and bring it back to life!