When life tosses you lemons, aren't you supposed to make lemonade? Not that life has been lemons per se – but there have been a few distractions. A move and a neighbor who might indeed be panning out to be a bit of a con artist. It's been a bit frustrating for Elaine and I because this is go-time for winter and these distractions have been hindering us a bit from keeping our eye on the things that actually matter, our bigger goals coming up. That, and well the snow has simply stunk, and it's not that hard to say, naw, let's just stay in today and do nothing. 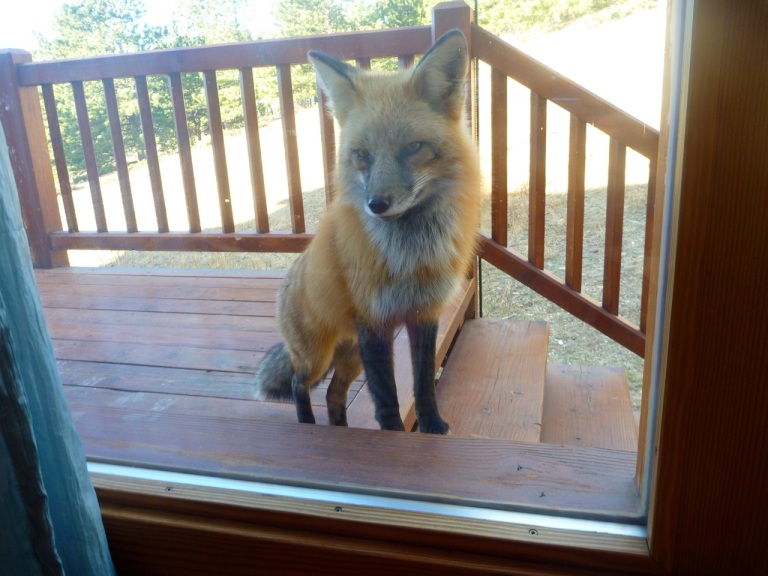 Elaine and I may have a con artist in our midst, but this fox, who visits everyday, is not it.

Thing is, that's kind of been my battle this whole life…basically refusing to just sit in. I kind of believe the second you choose to do that, you start to let stress and negativity and the less important things win. So today we decided that even though there have been distractions and this has been the driest November ever in Colorado, we were going to find some snow. And not just the white-strip-of-death snow at the resort, but something in the backcountry. Since it was a gaurantee that the snow would stink, we decided to tack on another goal: head to a nearby 14er and ski off the summit.

Oddly, Elaine and I have never been to the easiest and nearest of all the 14ers, Mount Bierstadt. I took an avy course years ago on Guanella Pass but have never stepped foot on the flanks of Bierstadt. We figured if there's snow it'll be at 12,000 to 14,000 feet. Surely we'd find a swath that ran at least 50% of the mountain.

Heading up the pass, it appeared we had entered into the absolute driest basin of an exceptionally dry Front Range. Barely a drop of snow anywhere on the road heading up to the pass. Some inquisitive Bighorn Sheep, yes, but no snow. We crested the pass and looked over at Bierstadt. While not quite dry as a bone, it was certainly not skiable.

The skis got left behind as Bierstadt, ahead, was barren of skiable snow.

What do you do? Make lemons out of lemonade. There was perfectly good 14er right in front of us that neither of us had climbed and we had three hours till sunset. Go time. Bierstadt is moderate 14er, but it's still a 14er which means you'll have to work some to reach the top. And indeed, near the top, we were working. I later found out that we were both simultaneously realizing that the Irwin Lake race in two weeks is going to indeed hurt a lot, but it is what it is. 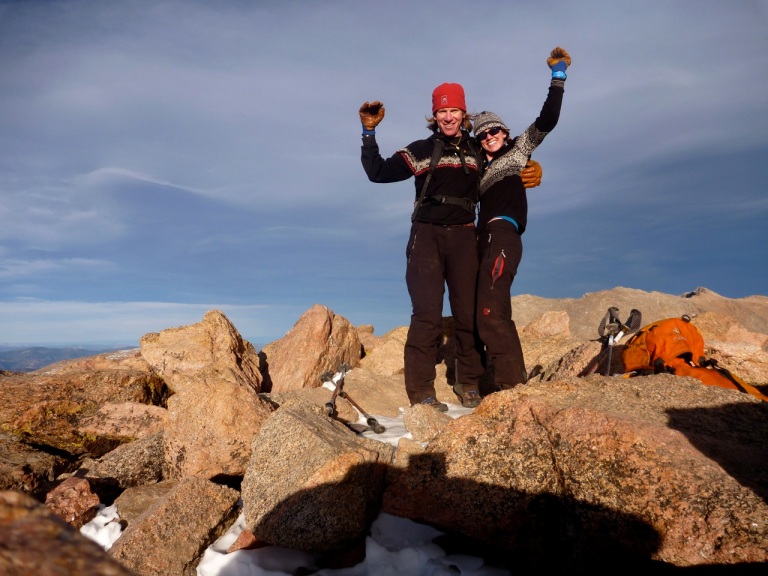 It was breezy and crisp up top but it felt good to be on top of the Rockies. We certainly had no intentions of climbing a 14er when the day started, but it worked out well. On the way down, as the sun was setting, we saw a couple heading up. Classic scene – boyfriend heading straight up the mountain, girlfriend about 100 yards behind, wearing designer jeans as the sun was setting and the temperature dropping into the 20's. Hopefully they got off ok. 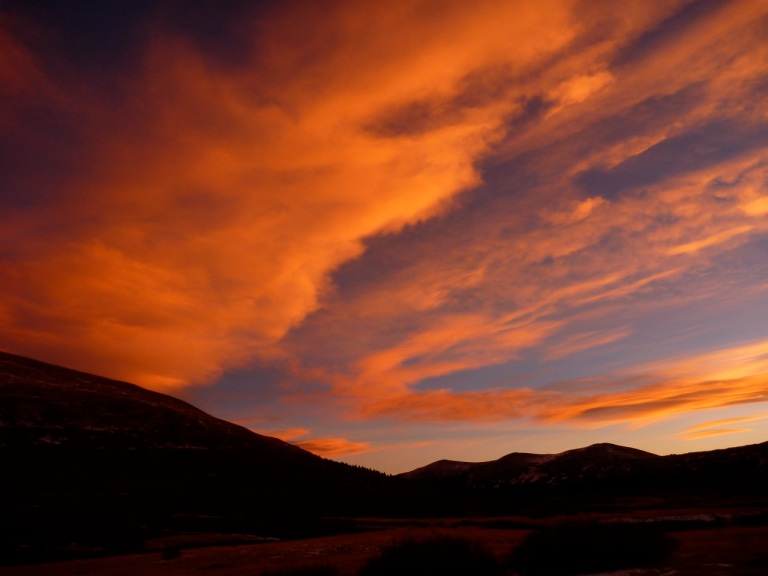 The light this evening was divine. That's the funny thing about right now…the ground has no snow but the light and crisp air scream early winter. Despite the fact that we didn't get in a single turn, it was a great outing. I think that's a key lesson – keep going for it. Find a peak and on your next day off plan to ski it. Don't worry about getting information beforehand, but do prepare in case there is no snow. The thing about these ski adventures is that it's only partially about the skiing. It's more about the light, the mountains, the company. The skiing will come, but the adventures shouldn't wait.

The light tonight up on Bierstadt…we'll never forget it…and I feel so fortunate to share it with my life partner. We spent the evening in a post-mountain climbing bliss, eating a meal of momo, chai and naan and doing a yoga session at home. I guess that's making lemonade out of lemons! 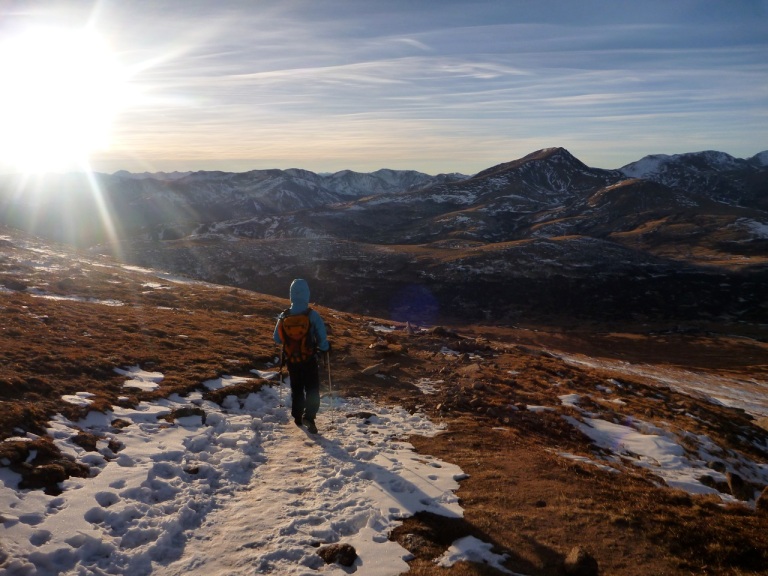 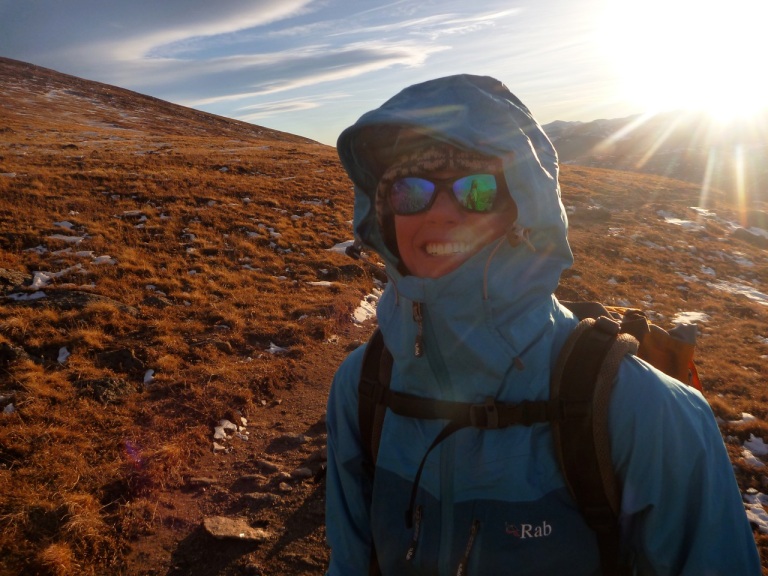 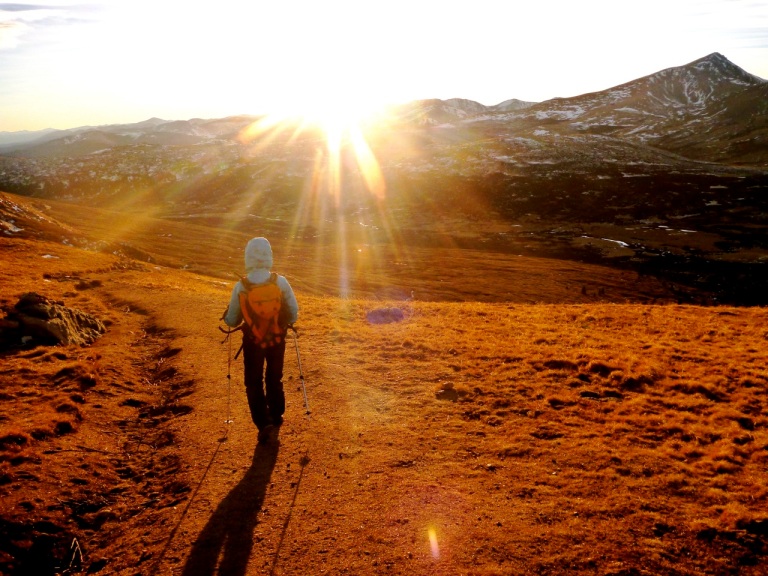 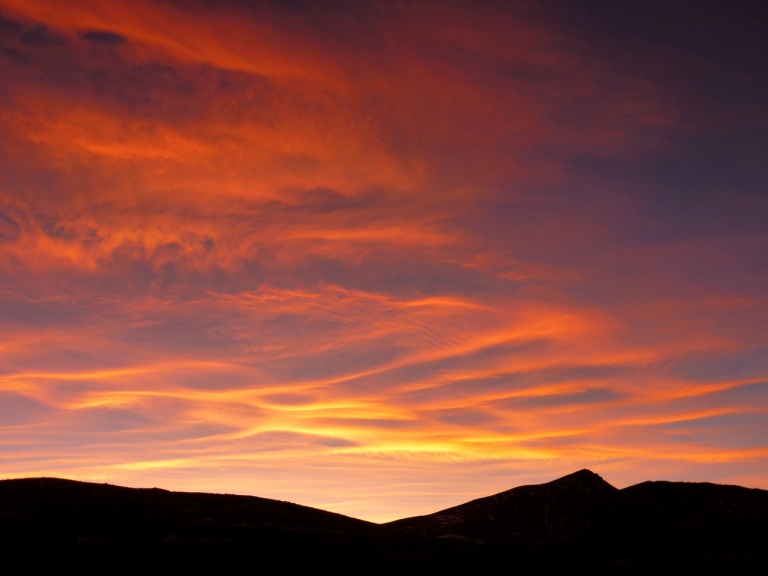 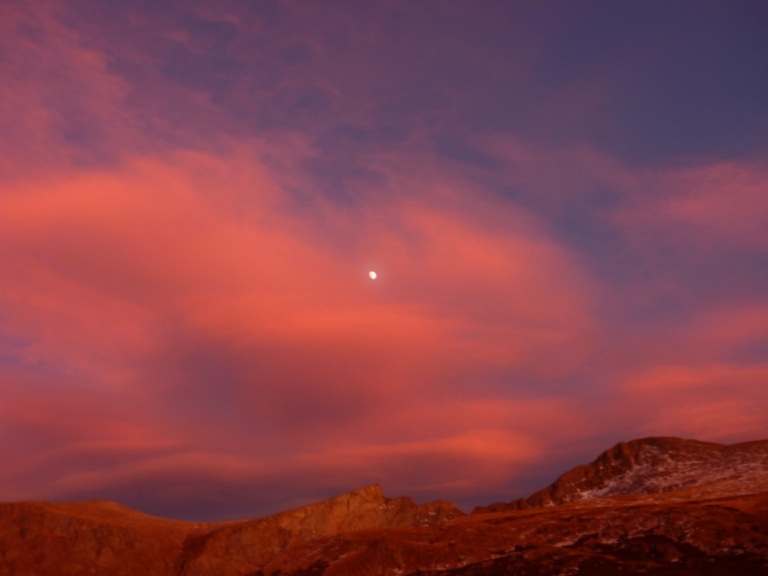 2 Replies to “The light was divine”