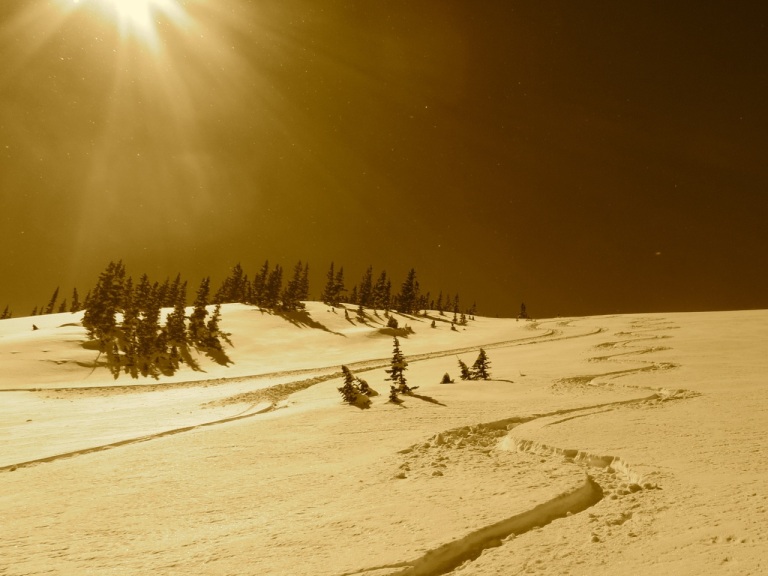 Elaine and I are fairly inseperable as anybody who reads about our outdoor adventures can gather. It's one of the best things about this partnership, having somebody who I can do just about anything with. It's awesome.

There are days, however, where we have to do our own thing. The past two days had seen hard skiing of more than 8,000 vertical feet, tons of mileage, lots of breaking trail and a struggle with warm and cold yesterday. It can be exhausting.

Because Elaine has less training miles under her belt – a result of being younger – we've found she needs a little bit more rest than I do. Today was one such day. While Elaine enjoyed fresh tracks on the local backcountry run with Stella followed by yoga, I headed a little deeper in there.

It was a warm day – no gloves, just a long-sleeve underwear top and baseball cap – fueled by the iPod mini. The goal today was my new favorite backcountry zone just west of where we live, and on this day the trail was wonderfully broken. Honestly, if there is one thing about backcountry skiing I don't like, it's breaking trail through heavy wet snow. Fortunately, a pair who must have gotten a crack of dawn start did the hard lifting for me.

The trail meandered up valley and then veered hard right to the summit of ridge line. It's a huff in here and the reward is total solitude and nature in her rawest state. From the top was s terrific perspective of Devils Thumb. It's hard to believe we live here and we can literally access this point without hopping in a car at all. 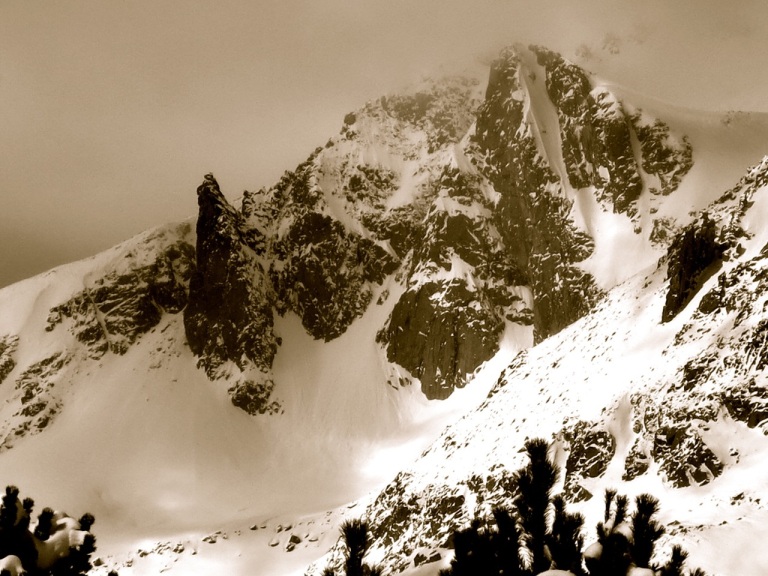 Since I was skiing solo today, I was pretty conservative in my decision making process. Backcountry skiing alone isn't really recommended, but I find I am very alert when doing so. It's not as safe as going out with Elaine, but it's more safe I believe than going out with a big group. You're cautious, because one mistake can be your last.

The mountain sloped east and there were some wonderful turns to be had as the warm March sun hadn't quite crusted it over yet.  The photo is kind of funny, because I think the pair who broke trail were split boarders or on massively wide skis, where as I was basically on rando racing gear. You can see the difference in our turns as a result of equipment. 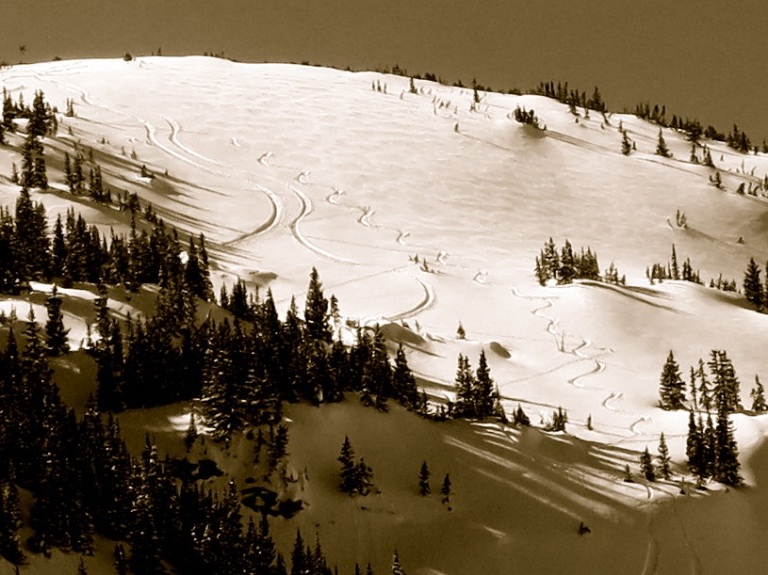 Near the bottom of the run things dropped much more precipitously, and I didn't like the feel of it. What to do? Turn around and skin back up and then backtrack the safer way home. I've got a lot to live for and six turns isn't worth risking it all for. Besides, I like the extra workout.

It was a nice five-hour day in the hills. I don't mind solo adventures from time-to-time, but I much prefer going out with Elaine. She's my partner in crime, and I suspect she'll be well rested and spry as heck tomorrow. It's supposed to be warm and windy tomorrow – skis are waxed yellow,globstopper is packed, sunscreen is ready to be applied and we're bringing all the wind gear we've got.