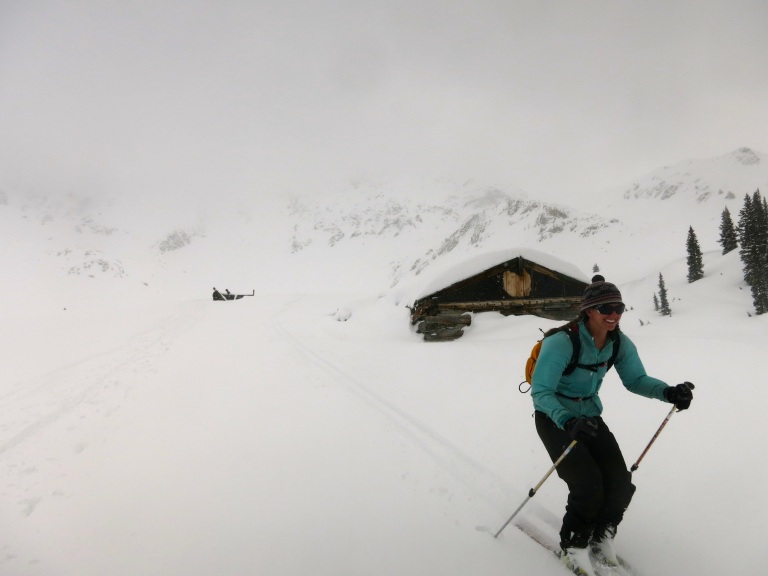 After the doctor's appointment and bad news, we decided to go for a little mellow ski up Mayflower Gulch. It was short and beautiful.

On April 4, just a few days after this year's Elk Mountain Traverse, Elaine and I did a skin and ski down the run behind our house where I re-injured a knee I hurt ski racing 22 years ago. There was heavy snow on top of a solid base, and when I made a turn the hill slid a bit. I got caught under it and felt instant pain.

I rested and recovered for a week or so, and the knee felt fine stability-wise, but there was some swelling. Skinning and cross-country skiing helped and I didn't think too much of it. I did make an appointment at the Steadman Clinic in Vail just after the initial injury, but as of yesterday I was seriously debating cancelling it because there was essentially no pain and things seemed fine.

Well, after a few tests today from the best knee doctor in the world and an MRI, it turns out I have a complete ACL tear in my right knee.  Based on the fact that there is no evidence of any ACL tissue the doctor thinks I have been operating without an ACL or perhaps 5% of an ACL for the past 22 years. The initial injury was diagnosed by a CU general practitioner as a LCL partial tear, but apparently ACL injuries can manifest themselves as pain on the outside of the knee.

Obviously, this is all a lot to absorb. But, based on Dr. Hackett's recommendation – and keep in mind this is the same guy who operated on Lindsey Vonn, Kobe Bryant and Simon Dumont's knees, and does 30 reconstuctive ACL surgeries a month – I'm going to have ACL reconstuctive knee surgery in a couple of weeks from him.

In the short term, it's going to suck. While June flowers are blooming and the peak skiing is at its best, I'm going to be fighting my ass off for full range of motion on the PT table. By the end of June short hikes will be possible, and by August longer hikes and bike rides will be in the fray. However, by September things will be improving, and I still believe a Long Trail hike in October is not out of the realm of possiblility. We'll certainly play that one by ear…it's not going anywhere and it's more important to get healthy. Dr. Hackett said that in six months – essentially the beginning of December – I'll be able to "really torque" on the thing.

That's exciting to me. The truth of the matter is, I haven't been able to "really torque" on the knee for 22 years. Through solid position and balance my body learned to effectively adapt to the lack of ACL, and it did a good job. I managed to do seven Montezuma Revenge races, a bunch 100 milers, 24 hours races, nordic ski races and three Elk Mountain Traverses. Given all that, to be able to have a knee with an ACL, and all the benefits that provides, is a thrilling concept.  It could open a lot of new doors.

I'll be honest. I'm a little scared. I've never had surgery in my life. But I believe strongly that this is the right thing to do. I'm not even close to wanting to stop skiing hard, and because this is 2014 and there are doctors like Dr. Hackett, I don't have to.

I have a number of things in my corner: I'm coming in strong, I have the best knee doctor in the world and I love to work hard physically. In addition, with my wife and family I have the best support system possible. The plan is to rest well, and then work my butt off in physical therapy, and, when the time is right, use these mountains surrounding our home to get hella strong.  I'm willing to give up one summer for thirty (at least) more years of playing and skiing in the mountains. The fact that next year I could have the strongest knee I've ever had in the last two decades is icing on the cake.

So that's my news. In the short term, it's lousy, but I'm cautiously optimistic that in the long term this will be a very good thing.