As we passed the bank sign in downtown Nederland, the temperature read 18° below zero. The sign switches from “Celsius” to “Fahrenheit” to “Time” slow enough so you can’t really see them all in a single pass, so I had check again to make sure the little “°F” was there. It was.

Actively seeking out lousy conditions is something we tend to do too often. Whether it be heading up a pass in the San Juan Mountains in a crackling thunderstorm or up Bald Mountain in the dark in 70 mile per hour winds, we both enjoy the wild. It’s not really a glutton for punishment so much as just wanting to feel as alive as possible.

Skiing in -18° F isn’t unprecedented by any means, but around these parts at the 40th latitude on earth in this era of global warming, it’s rare. It’s rare enough that it’s something to experience, if for no other reason than we are skiers and being a skier means being privy to all conditions. It’s a sport because of nature, not in spite of nature.

There are concerns though. An injury at -18° F could be serious. There isn’t much time to just stand around before the body temperature drops dangerously low. As such I decided to put one winter sleeping bag in the pack just in case.  “Just in case” is usually a substitute for experience, and since I have little experience skiing in temperatures this cold I figured we needed the “just in case.”

Heading up the Peak-to-Peak highway we saw a car pulling a U-Hail trailer stuck in the ditch. Mountain living means helping neighbors out in a bad situation, and this guy was in a spot. We couldn’t do much, as I don’t have a tow hitch attached, but I did happen to somehow remember that 303-258-3250 is the phone number for the police. It was a crap shoot – I was convinced the number was for either for the cops or the now defunct (sadly) Neo’s Italian Restaurant. The police took the call and sent for help. The shivering man who drove the truck into the ditch thanked us and we were back on our way.

We winded our way north on the Peak-to-Peak and then up the switchbacks of the Brainard Lake Road. A couple cars were parked in the parking lot, but they were long vacated, their occupants likely sitting around the roaring fire at the Brainard Lake Warming Cabin. The parking lot felt cold and stark, so I kept the heater on just to preserve that lifeline to the known and safe. We dressed, prepared, shut off the heat, and reluctantly and excitedly went into the outdoors.

The first thing you notice in temperatures like this is the crunch. The snow – and it’s a bit cliche but 100% accurate – sounds like styrofoam. We were bundled to the hilt, three layers on the bottom, four on top, hoods up, big mitts and hats pulled on tight. The cold pinched the cheeks and nose. Hoods up, we snapped into our three-pin bindings and headed west.

At first, it all felt alien. The hood shut off the world, and with just a headlamp guiding the way and Elaine’s shadows striding through the woods, and bits of oppressive cold smacking the face, it truly felt like the planet Hoth or the summit of Everest. It was uncomfortable, so I lowered my hood, and the cold rushed in. After that initial shock, it was better, all the senses being used instead of covered up.

Cross-country ski touring through a deep winter forest at night is one of life’s great pleasures. It’s a tunnel of adventure, with childhood stories and images rushing forward. It’s a trip through a forgotten world of elves and trolls and story time. The woods echo with ski strides, shadows promise wolf howls, a warm, foggy breath our entrance of passage. We slide through Wilderness, both in nature and ourselves. 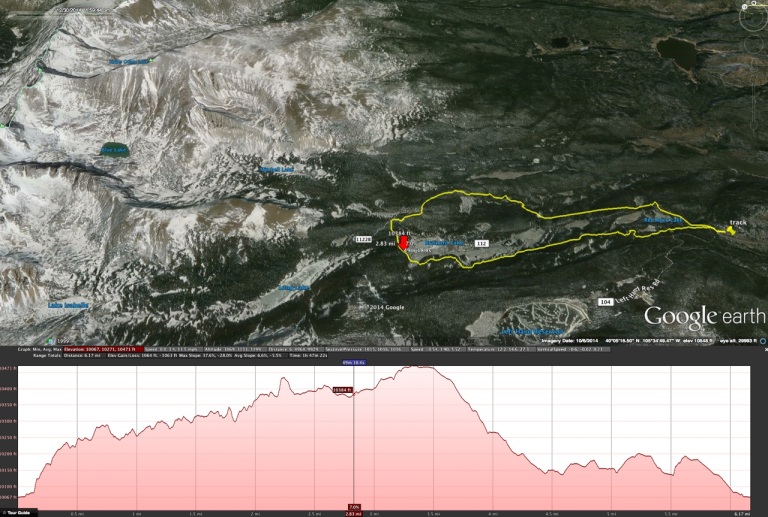 Our route for the evening.

The cold is there, but it is not a problem. Occasionally I ask Elaine, “Are your feet warm?” She responds yes every time, because I’m honestly not sure if my feet are actually warm or the cold is causing me to lose my mind and not realize that they have frozen off. But alas, they are warm. Hands are toasty, and at one point, on a brisk climb I can almost feel a slight sweat building, although it soon subsides on the flat. Make no mistake – it’s cold. We’re wearing almost double the layers we normally do nordic skiing, we’re moving hard and we’re barely heating up. To stop is out of the question.

The snow is very slow even with Polar wax. On a night like this, you might not need any wax. At times, it feels more like skinning with Mohairs on, and the descents are quite mundane as a result. But it’s still fun. We break out onto the road and stop briefly as the ghosts of Mount Audubon and Mount Toll glorify the land under the moonlight. It’s back into the woods, past the hut, where a yellow glow and stunned onlookers watch our passing. We briefly lost the trail, found it again, and – thanks to the slow snow – moseyed down a hill that is usually a roller coaster of adventure. This is the only place I’ve seen Gary Neptune crash, and that speaks volumes.

In the silence we continued. This is a special spot for us. Six years ago, under vastly different circumstance, I think it was here that Elaine and I began to fall in love despite the impracticalities and massive obstacles. Skiing in the woods, in a beautiful place, with a person you connect with better in the world than anybody else can do that. I don’t know…it’s hard to put into word, but I know, on this last day of 2014, that the feeling I have skiing through the woods with her are just as – and really much more – strong. It’s a great thing, and it’s the fuel that drives us. Mushy and idilic perhaps, but as real as can be.

Up out of the woods we came. The last few whoops brought shouts of joy, and as we crested the top of the last hill, and gazed at the divide, I captured one quick iPhone photo, hands freezing, for posterity sake. It was a wild frost kind of night, a Jack London kind of night, a night of love in the wild winter. 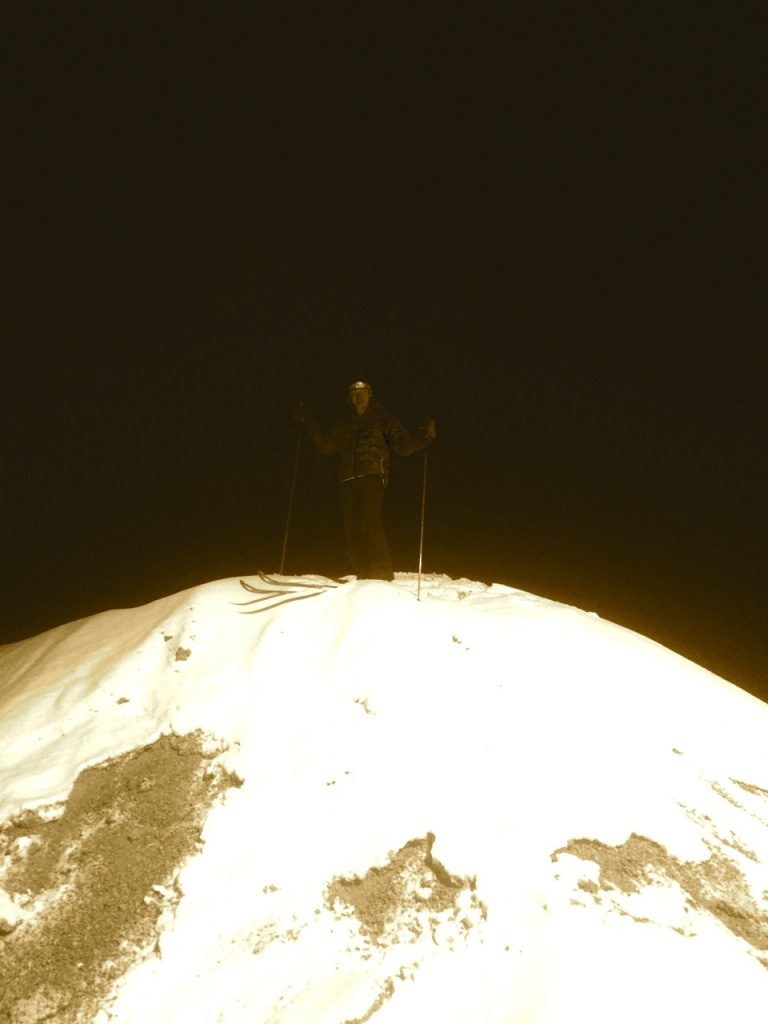