Dense fog came rolling through the spires as we approached the top of the pass. Thick clouds, heavy with moisture, banked on top of each other, so close I could pull their damp woolen threads down around me. After a small snow climb followed by a bit of scrambling up (slightly unstable) rock, we were almost there – and none too soon.

Working our way up no name pass.

Having taken no more than a few steps down the other side of this nameless pass, thunder began crashing over us and the skies unleashed torrents of heavy rain. As we moved as quickly as we could beneath the towering Temple Peak along a sloping snowfield to Temple Lake, I thought to myself:

South Pass City was a place of transition, for as we headed out of the small historical site, we were heading into the Wind River Range – a place I had been looking forward to seeing for a long time. Dan has spent a significant amount of time in the Winds, and as an employee at Neptune Mountaineering, I often helped people before their trips up here. But I had never been myself, and was very excited to be going there.

Heading out of South Pass City, closer to the mountains!

We camped not far off the north side of WY Highway 28, definitely feeling a bit shelled from the trek across the Great Divide Basin. I performed a short yoga sequence, with the hopes that it would help with some of my issues. Aside from coming out of Wyoming’s Red Desert with an infected toe, I was also just in a lot of pain. My elbows hurt, and my knees and hips hurt so bad that squatting to pee was a very painful experience.

It might look like typical hiker trash, but I cut this hole in my shoe intentionally, as my infected toe was swollen even it no longer fit in my shoe.

Of course, no matter how badly we wished it, we had not magically been transported to the Wind Rivers, and still had to hike through the transition zone. The desert and a mountain range with an impressive number of glaciers are really shockingly close in this part of the country. The next day was spent hiking through that transition zone. We would go through forests (with trees and undergrowth and brooks and everything!) only to be spit out on a sagebrush covered ridge.

The things that are green and growing!

But water was frequent enough and by afternoon we had passed into the Bridger Wilderness to camp next to Larsen Creek, where Dan, who brought along his Tenkara fishing rod, fished a bit and I did an extra long yoga session.

Dan enjoying some moments of peace on the river.

Tenkara and Hyperlite: all you need for the Wild Rivers.

Our next morning dawned overcast, with a ton of condensation clinging to the tent. Soon into our hiking morning we were rewarded with our first glimpse of a classic Wind River view. Little Sandy Lake sat nestled in a basin below us with great granite cliffs rising dramatically up behind, snow still clinging to the flanks of all. Laughing with the joy of being back in the mountains, we swooped down the trail to Little Sandy Creek, where we deviated from the trail. The official route went left while we went right, up towards those majestic peaks. That morning the clouds could not decide what to do, drifting heavily across the sky, followed by patchy sunshine, one moment of which we took advantage of to dry our tent and eat a snack.

With all this moisture come the mosquitos!

Soon we were by lake 10,800′ (which was still mostly frozen over) and planning our route over the pass to Temple Lake. As we crossed over amidst thunder, pelted by rain and some hail, Temple Lake proved to be just as incredible as the name implied. I had thought, when seeing Temple Lake on the map, that it must be a special place, and truly it was spectacular! 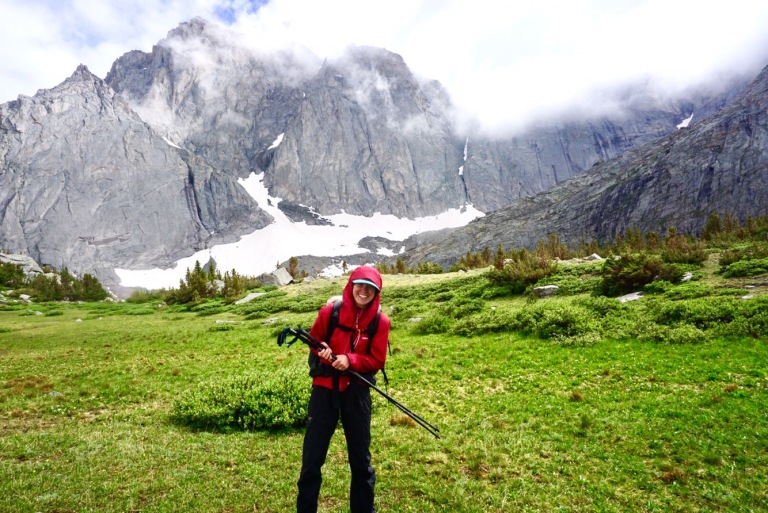 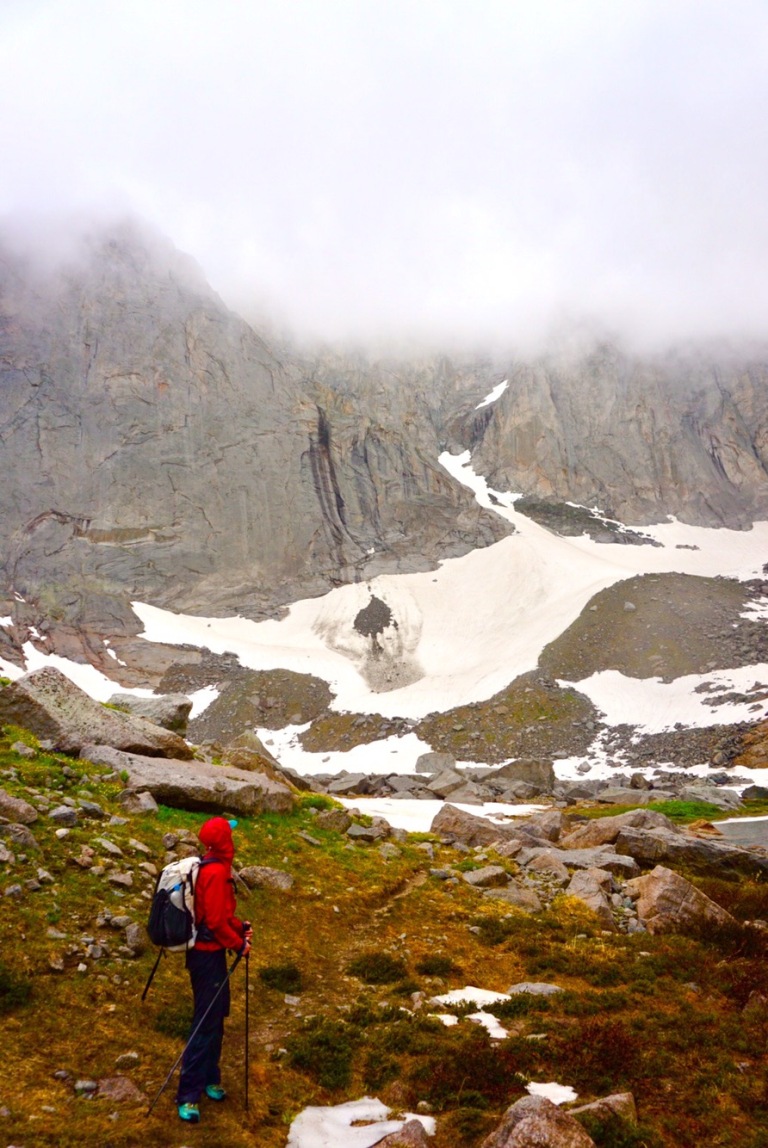 This is my temple.

Crouching under a rock outcropping to inhale another snack, the rain pummeled down and we stared in awe at the beauty surrounding us. Then it was up and moving again, down, down, down the valley to Big Sandy Lake where a bunch of people were coming in to fish, and then up another pass. Jackass Pass (so named because you cannot get a horse over it, as we were told by a passerby) turned out to be slower going than we thought, so we camped at North Lake, under the imposing shadow of War Bonnet Peak. I found myself crying. Not because I was in pain, or necessarily upset. We had been hiking for months, and now I was in a place that I wanted to stay. I had dropped our mileage down to 20 a day, but it felt like too much. 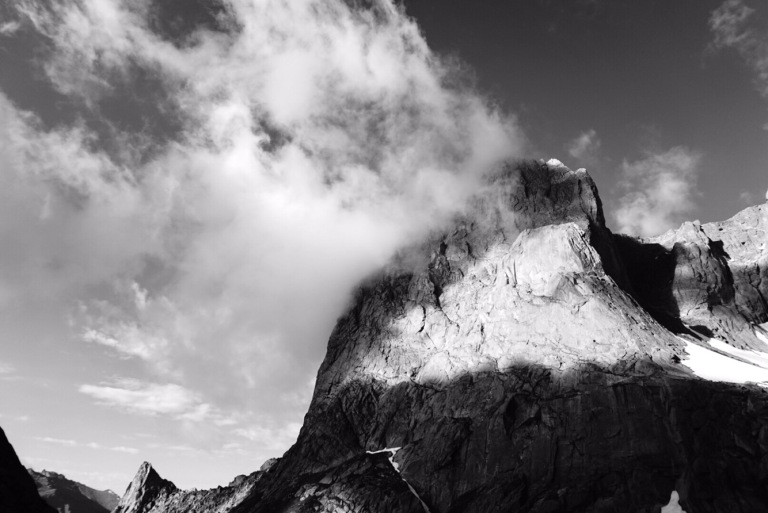 A little yoga at North Lake.

Stars popped out of the velvet night sky, surrounding War Bonnet. I found Polaris, as I have every night, and fell to sleep, enchanted by the Winds.

Some fun at North Lake.

War Bonnet puts on his colors for the morning.

The next morning was a finish up and over Jackass Pass down to Lonesome Lake, which sits surrounded by the Cirque of the Towers. It’s a popular place, though we only saw a tent and no people, and there’s no question of why! Giant cliff walls explode from the ground, rocketing up to the sky, drawing your eye up, up, up. Almost, my senses can’t even take it all in. We lay at Lonesome Lake, staring, staring, trying to make sense of it all. 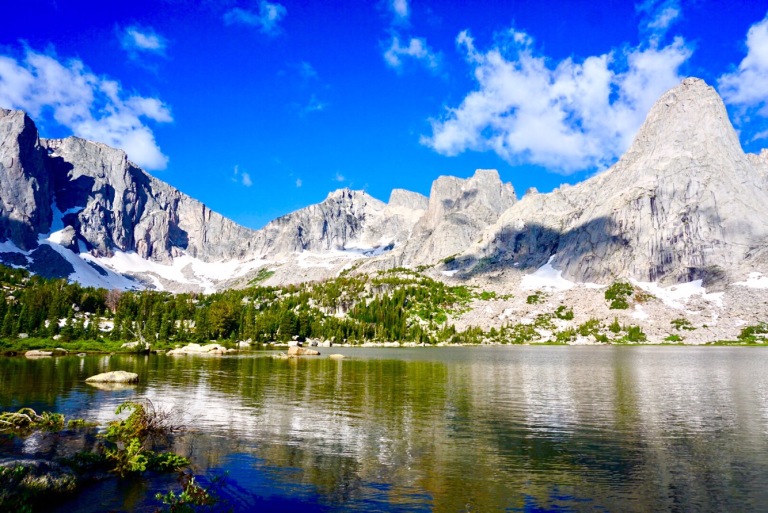 This is nonsense. How can a place be so…much?

Eventually the morning ticked on, and we had miles to make. So up we got, packs on backs, and began the huff up the creek bed. We distracted ourselves for a bit when we spotted a couple of climber on Pingora Peak. That’s true badass!

Pingora Peak is the towering peak behind me, lookers right.

On and up, ever up, up the creek bed, up snowfields, and then finally, up on Texas Pass. At Texas Lake, we ate, dried the tent, and watched a rock wren hop about, wondering what he was doing so high up. After snack it was down the valley for us, where we ran into a NOLS group.

Down to Texas Lake.

This triggered a conversation that lasted all down the valley until we rejoined the CDT, where Dan realized he had lost his knife. Reluctantly, we set our packs down and Dan headed back up the trail, looking hard, while I stayed with the packs (we both had nightmare visions of coming back to marmots having eaten our pack straps). After a while, Dan was forced to admit the knife was probably at Texas Lake, and was not going to go that far back. So we headed on, annoyed at our mistake. Usually when we take breaks, we inspect the area when we leave to make sure we aren’t leaving anything.

More thunder followed us, and then a massive storm, lighting flashing, thunder crashing, hail pummeling from the sky, forcing us to take shelter before we headed out exposed again up high. As we couched under a copse of trees, hands over ears, we screamed at each other, terrified by the storm, crazed laughter punctuating our shouts.

“It’s like a toddler is having a temper tantrum, except that toddler is Thor and his Mjolnir!” I shouted back.

Eventually we could continue, and we set up camp at Raid River, when I was so tired that I was tripping over every rock on the trail.

The following morning dawned straight up cold, and we hiked in our rain gear with mitts on for quite a while. The trail took us along a chain of lakes, one perfect alpine lake followed by another. How is it that one place can have such beauty?

But as we neared Hat Pass, another high, exposed area, yet another thunderstorm rolled in. Instead of the whole song and dance of terror involved with that, we elected to head down to the Highline Trail, which stuck to a lower elevation, to feel safer as the thunder boomed over us. As evening fell, we found ourselves at Chain Lakes, and decided to stop.

Looking over the map for the next day’s travel, while holding my “food baby”.

The sun set as we cooked dinner under the raging sky, but hurried to bed as yet another thunderstorm crashed over us, so close we could no longer count the seconds between lightning and thunder. I fell asleep faster than Dan, pure exhaustion pulling me under.

When we awoke the next morning, there was a certain hurry to packing up, always brought on by the prospect of a town day. We hadn’t had a shower since Rawlins, and had hoped to take a dip in the lakes here in the Winds, but with the thunder storms, and a high amount of the lakes that we’d passed still having ice in them…it just hadn’t happened. And food. Our minds ever revolve around food, and today as we hiked, we let ourselves talk about food, a topic that is usually (but unofficially) off limits. We talked pizza, hamburgers, apples, orange juice, bananas.

A cold morning made colder when you get to start off with a “car wash”!

It’s the Wind Rivers, and crossing rivers is the name of the game.

Soon, soon, we were at the trail head. No sooner had we stared trying to hitch, than a pickup pulled over. An awesome family sorted themselves around and squeezed us in. It turned out they had been hiking the CDT north of us, and we had a great time talking trail all the way to Pinedale.

At Photographer’s Point, a glimpse of the terrain to come.

2 Replies to “CDT Journal: Into The Winds”