As the long summer turns to the dog days of August, the trail follows suit. After the wild splendor of the lush Wind River mountains and the sublime beauty of Yellowstone, we’ve entered terrain that is a little less spectacular but no less difficult on the tired body. The Continental Divide Trail along the southern Montana/Idaho border tests the mind, body and spirit.

The Continental Divide is not a straight north and south route. Nowhere is this more evident than in southwest Montana, where the route, following the divide, swings agonizingly far west, then north and then back east again before resuming its course to Canada. As summer turns to autumn and thoughts turn to future work, skiing and adventures, it takes energy to stay focused on the task at hand.

The CDT is unique from the Appalachian Trail and Pacific Crest Trail in that it is accepted practice to hike “alternates” when the regular route does not work for whatever reason. For example, in New Mexico the official route follows a ridgeline walk through the Black Mountains. Very few follow this route, instead choosing the Gila Wilderness route. Simply put, the Gila is much prettier and almost everybody goes that way, CDT markers be damned.

As one heads north alternates abound. This seems to be especially true as the date grows later, as we hear of more and more “alternates” popping up to speed up progress and hasten arrival in Glacier. These alternates are tempting – that’s natural with the changing of seasons and the press of time. And when the trail gets tough, as it did between Lima and Leadore, a long road walk to cut off hundreds of miles of divide walking can seem especially appealing. But we’re not going to go down that route. For us, it’s not right. We have a certain way we want to feel about this hike when it’s finished. We want to have absolutely no regrets when we cross the Canadian border.

The trail straight out of Lima was some of the most difficult on the entire route. It’s 103 miles along the divide, or four approximately 25 mile days. Each day consisted of 5,000 feet of climbing, give or take a few hundred. We have not encountered terrain that undulating for that many days in a row since Colorado. The one thing that make it easier is that Montana/Idaho are simply lower than Colorado. Whereas the route in Colorado was at 11,000-13,000 feet, in Montana it’s at 8,000 to 10,000 feet. That makes a significant difference in effort, recovery and appetite.

Day one out of Lima was very challenging. The route followed the sage covered spine of the divide, climbing steeply 200 to 300 feet at a time. On the profile map, this day looked like an EKG machine, with steep peaks and valleys. A long two hour consistent climb is much easier on the body than repeated short, steep, punchy climbs. Elaine and I reminded each other that this was great ski training, turned up the volume on the music, and suffered through it. If we have one ability, it is an ability to shut off the mind and suffer for hours on end. This was no longer a meandering hike through the west – it was intervals up hills behind our house, hour 23 of Expedition Amundsen, Richmond Ridge of the Elk Mountain Grand Traverse, and the hours of pain training and racing that we’ve grown accustomed to.

While the initial day was the queen stage of the route between Lima and Leadore, the other days offered similar feels. Long grassy ridgelines, steep climbs and descents, occasional forests, cows aplenty and a hazy atmosphere filled with smoke. There were exceptions, however. We camped at a place called Deadman Lake on night two, a beautiful blue oasis in a forest, and caught a couple Cutthroat Trout. The last day featured a climb up to the top of Elk Mountain that will be our last foray above 10,000 feet of the trip. The rock cut bench trail reminded me of the route up Lake Ann Pass in the Sawatch…it felt good to get up high. 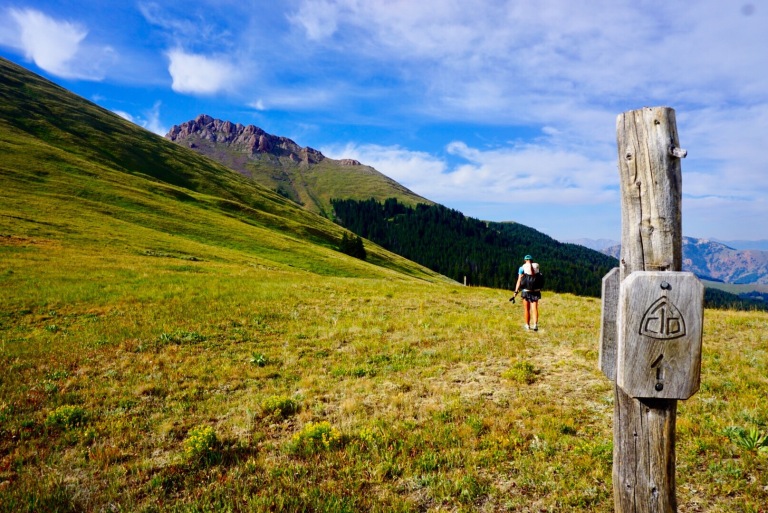 Of course a highlight of this section was the much anticipated eclipse of 2017. For most of the hike, this eclipse has actually been something we’ve been nervous about, as we did not want to be in a town during the event. Hotel rooms that are normally $50 in Casper, Wyoming were selling for $600 on eclipse weekend. Our goal was to be deep in the backcountry during eclipse madness for the simple reason of expense.

We timed it well. Our hiking during the eclipse was along a high ridge on the divide and there was nobody around. We purchased the glasses and enjoyed watching it grow. We decided to lunch early and witnessed a 99% totality, with about five minutes of very surreal beauty. The land turned sunset color but the shadows were still coming from directly above. And then it got cold, very cold, perhaps a 20 degree drop in temperature. Perhaps the most significant thing I got out of the experience is how life on earth basically is sun driven. Without it, I suspect life on earth would cease in a few years. It’s a fragile balance we live on.

Eclipses aside, on a 3,000 mile hike one encounters much beauty. But honestly, sometimes it’s moving forward through terrain that is less inspiring. This would be an accurate portrayal of the section from Lima to Leadore. Beautiful in its remoteness and open western feel, but not spectacularly so. However, as we move north, the promise of more jagged peaks, deeper forests and true Wilderness beckons. We are entering the land of Lewis and Clark, wolf packs, designated Wilderness areas and one of the greatest National Parks in the land. Good things lie ahead, however challenging it may be to get there.

Leadore is a fascinating town. A main road runs through a mountain valley surrounded by ranch land and sage hills. The town consists of a few houses, a restaurant/bar, a hotel and some very interesting locals. We are in the heart of the wolf controversy here. Indeed, google search Leadore and wolves and you’ll find numerous accounts of ranchers who have lost many heads of cattle and sheep as a result of wolf depravation. Wolf trapping and hunting is common here.

We had a good discussion with a rancher about this issue. Full disclosure – we’re about as pro-wolf as they come – but we wanted to hear the other side. This rancher and his wife have lost – according to their estimates – $100,000 as a result of wolf depravation. It’s not a theoretical issue for them…it’s real. He has killed 24 wolves in the past 15 years, all legally and reported, a result of them harassing cattle or sheep on his land. He told a story of how he shot a female wolf pregnant with nine or ten cubs. And then, a revelation. He said he was not happy about that. Yes, he was happy to no longer have that wolf or its future cubs harrassing his cattle, but he didn’t like having killed those pups. He talked about the majesty of wolves, how beautiful they are, and how he sometimes talks to them, gives them names as he watches them cross a distant ridgeline or disappear into the forest.

That revelation made me feel better about the situation. He’s not killing wolves because he’s a bad person. He’s doing it to defend his livelihood. I appreciated the conversation and the honesty within. He left because a call came over the radio of a car accident and he is an EMT. Rancher, wolf hunter, life saver. Life is not clean and simple and it’s certainly not black and white.

I’ll never hunt a wolf, but I also won’t demonize somebody who does so with reasons like that rancher. We’re one but we’re not the same. That realization and lesson makes some steep up and down well worth the effort.