Sometimes you have to find the things that were good, rather than dwell on the things that were not. This section, as we poured over maps of the area in Darby, was looking bleak. Smoke filled the sky, and every time we talked to the FS rangers, there were more updates on fire closures. Despite this, there was little to no information about where we actually could go, what was even a viable option. As smoke filled the sky, and the walk went on, ash falling on us, sun beating down, there were still the things that were good. But instead of recounting the many hours of ash, smoke, and road, I thought I would count what made this section awesome:

We ended up hiking this section with three other hikers: Dumpling, Lumber, and Sherpa. (And Chosen, if you count watching him disappear into the distance.) We all stayed at Curtis’s place in Darby (thanks Curtis!) and started from Chief Joseph Pass down the highway to Wisdom.

Friends are essential for road walks

Thanks Sherpa for being a goof and making us all laugh! Also, good luck with the shoulder and no more one armed push-ups.

Thanks Lumber for the long talks, chats about music, and being the main source of sound along the endless stretches of highways! And push ups! All the push ups

And thanks Dumpling for the hours and hours we spent, grinding away those highway miles beneath strings of words. It was awesome getting to know another woman out here!

Also, thanks to Chosen, even though your legs ate up the miles so fast we just saw your little backpack disappearing into the distance!

Bandits along the road!

The outhouses we encountered on this section were some of the nicest outhouses I’ve been in since Norway. Clean, with quality Charmin toilet paper, hand sanitizer, and no dreaded “cone” – it’s the little things that count.

Home of the cleanest outhouses

After a frigid night in Wisdom, we stopped for breakfast. As soon as we walked in, a woman recognized us as hikers. We were on our way to walk the highway, she was on her way to look for sapphires. (Wonder who had a better day?) After chatting briefly, she left, and paid for all of our breakfasts on the way out. Angels – they’re here with us.

Dumpling’s boyfriend banged out this section in one go, getting to Anaconda at 3am. He was hitching back to Darby to pick up Moose (their pup), and found another angel who drove him all around, including to swing by where we were on the road, with a 24 pack of Coors Light and took some of the dead weight we were all carrying. Thanks Wolfman!

5. Horses Who Come to Fences!

Most of the horses we’ve met have been sort of shy. Along one stretch, three horses decided they’d really like to be pet. So, of course we obliged, because, anything for a distraction!

The second night out, massive flakes of ash were falling on us. Icky for the lungs, but sort of fascinating.

7. When Tenkara is Better

At one point we took an extended break/lunch by the Big Hole River. A couple of fishermen were out in their waders, long rods whipping back and forth, seemingly with little luck. So of course Thunder decided to give his little rod a try, wading out in his shorts and trail runners. He caught three trout before having the good sense to come back in.

This debate lasted a full hour at least. Smoke with cloud on top? Just billowing smoke? It’s fog! Unfortunately it was pure smoke, but the conversation passed some time.

As advertised in Wisdom, MT: Do you have a few old cars sitting around? Would you like to be rid of those hunks of junk? Free up some yard space for an organic farm? Bring your old rusteds to Highway 43: we have a pit we’d like to fill, and old cars work best! 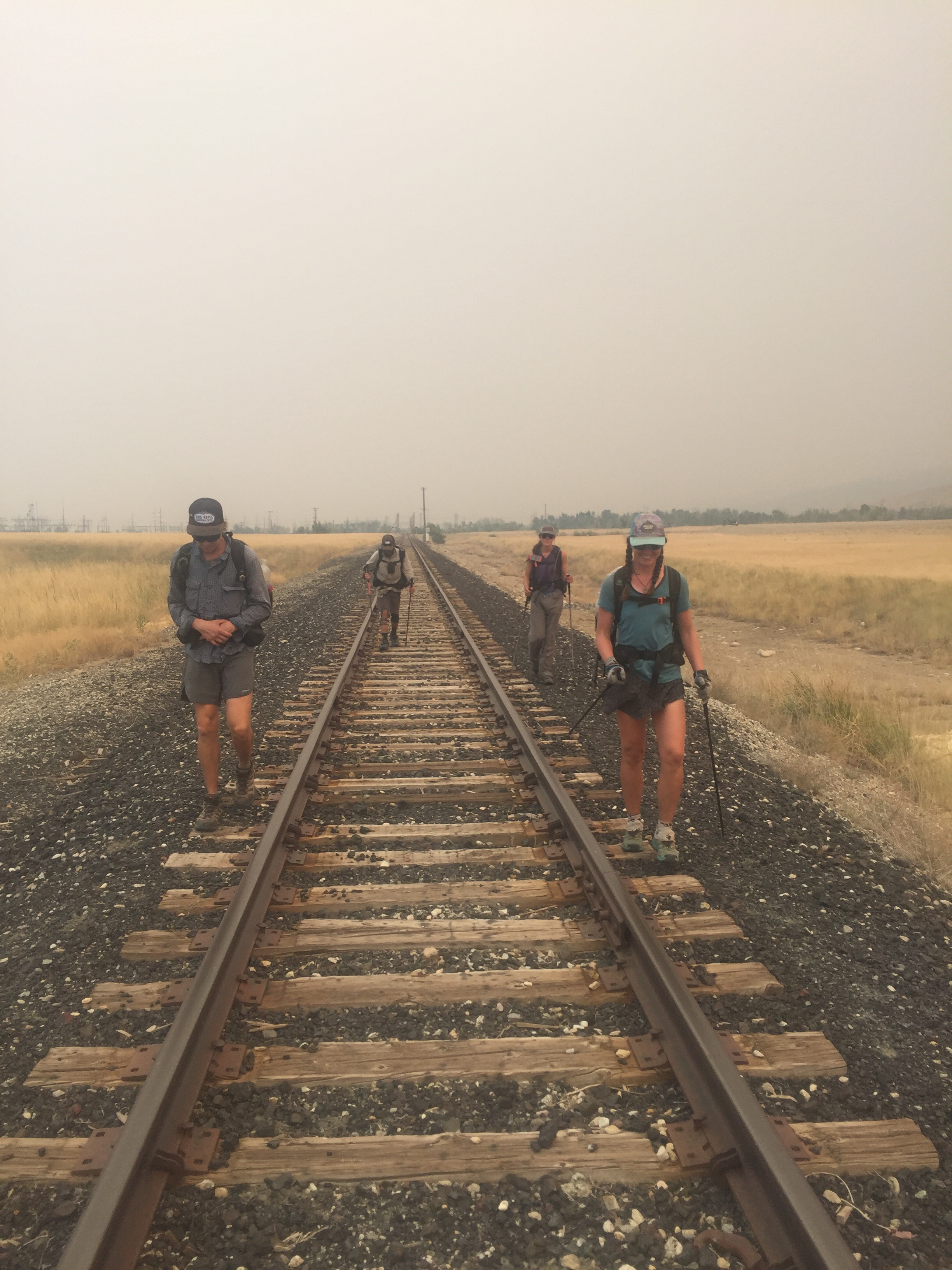 Because, of course when you see train tracks, you want to follow them. These particular train tracks apparently led to the largest superfund site in the world.

Rusty old tracks, skeletons littering the sides, mounds of deep black rocks, and that smell, what is that smell? Combined with the blood red sun and the heavy haze of smoke, it wasn’t a far stretch to believe it to be something straight out of Divergent. 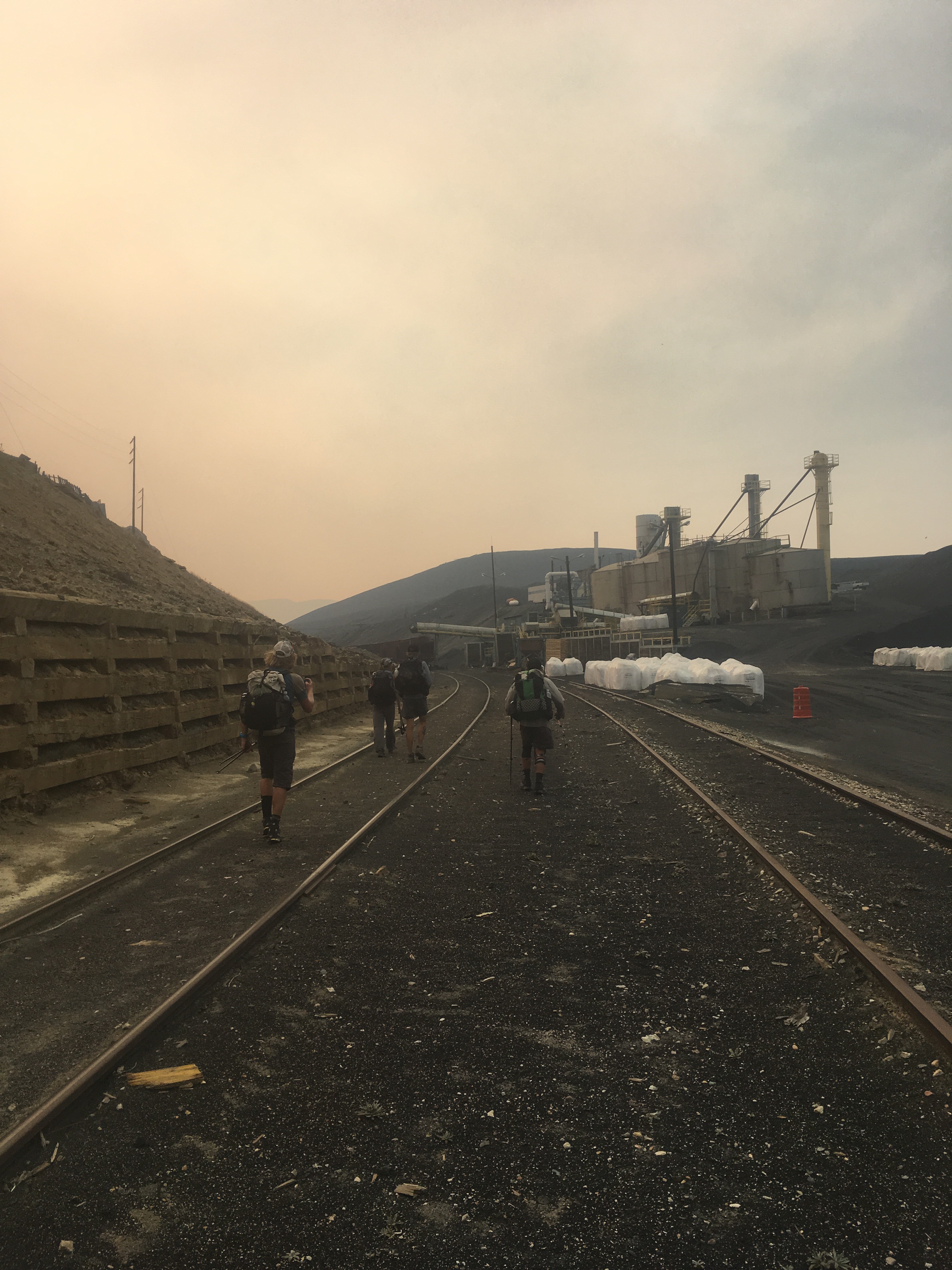 There weren’t any No Trespassing signs…

These ten things brought us all the way to Anaconda – and the McDonalds there. And of course, can anyone say no to a chocolate shake?

Also, thanks to Lumber for many of the photos in this section!