Several days before Helena, I was multitasking. Between making dinner, purifying water, and writing in my journal I got thirsty and grabbed a water bottle. Gulp, gulp, gulp – and then I paused, a mouthful of water still in my mouth, eyes staring at the bottle. Damn. This was the bottle I was getting ready to purify. I leaned over, spitting out my mouthful of water, spitting, spitting. I stared at the puddle of water slowly seeping into the ground. Well.

Now I’m not sure if that mistake was what caused the nausea, or if simply breathing smoke for weeks on end caused it, but for this whole section, I’ve had a moderate constant queasiness. The most depressing thing is a burger doesn’t even sound good!

The trail started a mixed bag out of Helena – some beautiful trail, some old forest service roads, and some straight ups and downs. It wouldn’t be the Continental Divide Trail any other way!

The gang’s all here!

We reached Dana Spring – I guess in the springtime there is water coming from an actual pipe, but this late in the season, it’s reduced to a puddle about 3′ down at the bottom of a metal tube. But the puddle provided water for all. 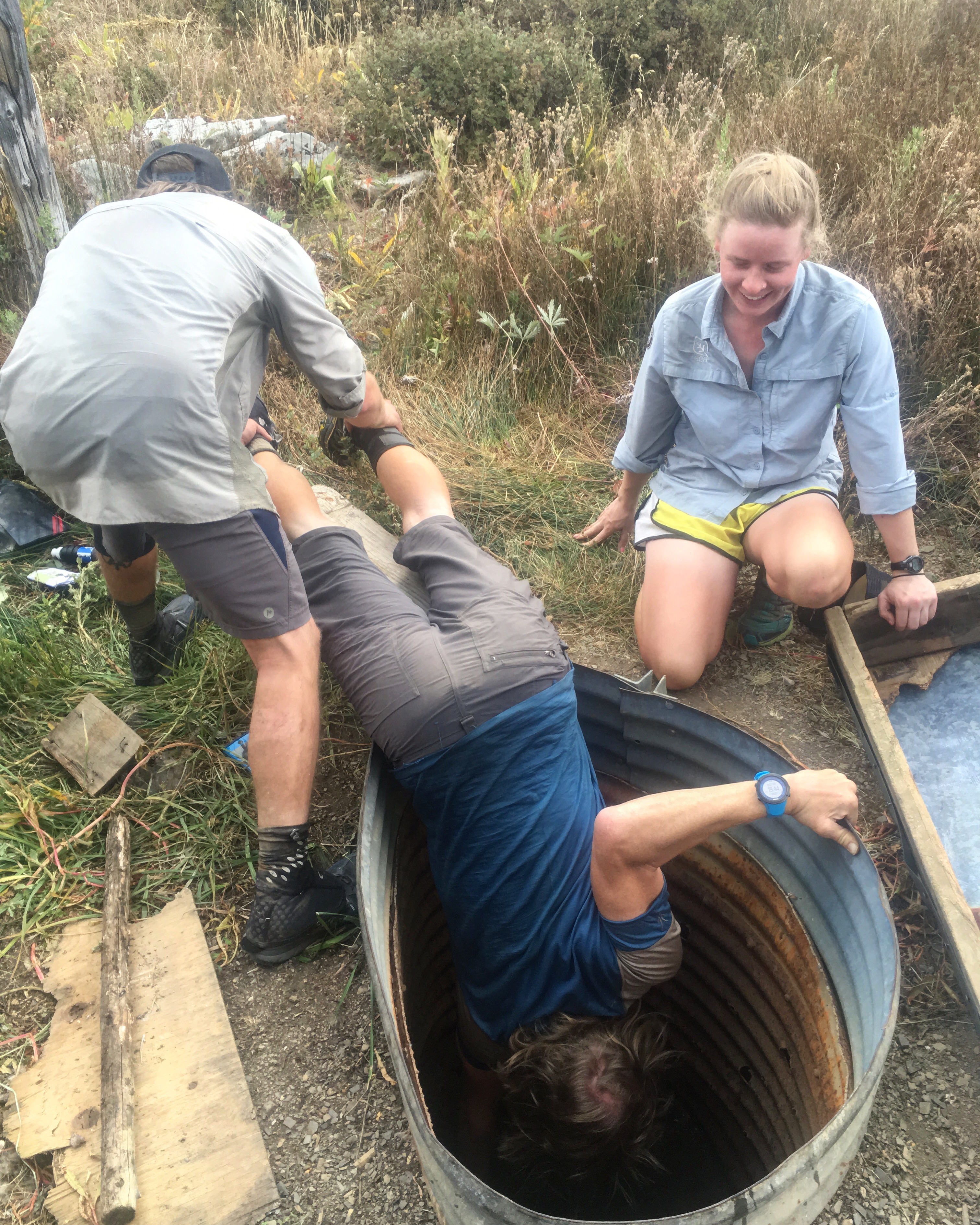 The water…I think I can reach it.

Most of the group stayed and cooked dinner there, as it was a fair stretch until the next water source, but Dan and I headed off (one of my favorite times of the day is dinner, and I don’t like to spoil it by having to hike afterwards). Almost immediately thunder and lightning rolled in. A brisk rain fell – the first since my birthday – but with the lightning and the wind ripping around, we wondered if this storm would do more harm than good.

Light rain – the first for us in a month.

Wind became the story of this section – battering us as we climbed up and down barren ridges, snapping backpack straps across our faces, and whipping dust into our eyes.

The wind howled all night long, whistling through the trees, and causing Dan and I to constantly peer about for a dreaded orange glow, wondering if a lightning strike fire was being whipped into a frenzy up the ridge towards us.

No tree fell on us, and no fire came roaring up the ridge, but that morning dawned on us groggy from lack of sleep. So it was off and at it again. Up and down dry, dusty, and now windy ridges, my stomach gurgled and moaned the whole way. I tried downing water, wondering if I was dehydrated. Most of our food was unappetizing, but I forced it down, as my body hadn’t started rejecting it.

Getting beat up by the wind.

This section would be a 28 mile stretch without water, except that there are some locals that stash water at two of the passes, so the day became dictated by the water at these passes.

We lunched at Stemple Pass, hiding in the trees, and watching folks drive by on the ATVs. The outhouse had a trash can, which we all delighted throwing our trash in. Moose, Dumpling and Wolfman’s dog, proved he was not pure lab by turning up his nose at every treat offered.

Lunch for all – except Moose. Moose has no time for such things.

After a somewhat blistering pace set to Flesher Pass (during which my stomach totally rebelled and required me to sit and try to quell it), we arrived in time for dinner for most.

Before the sky exploded.

Once again, Dan and I went on, stopping 8 miles from Highway 200 and Roger’s Pass, where the trail north of which was closed. 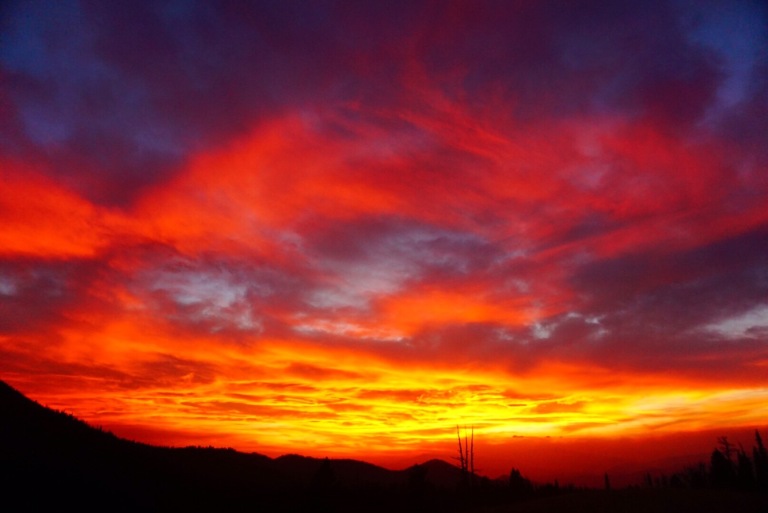 A raging sunset trumpeted the end of the day, and the wind howled.

Yet another night of terrible sleep with the buffeting wind found both of us dragging. Everyone passed us as we lagged out of bed. Finally, we were packed and ready to go. Most of the trail miles were on exposed ridge, where we were blasted by the wind all morning. 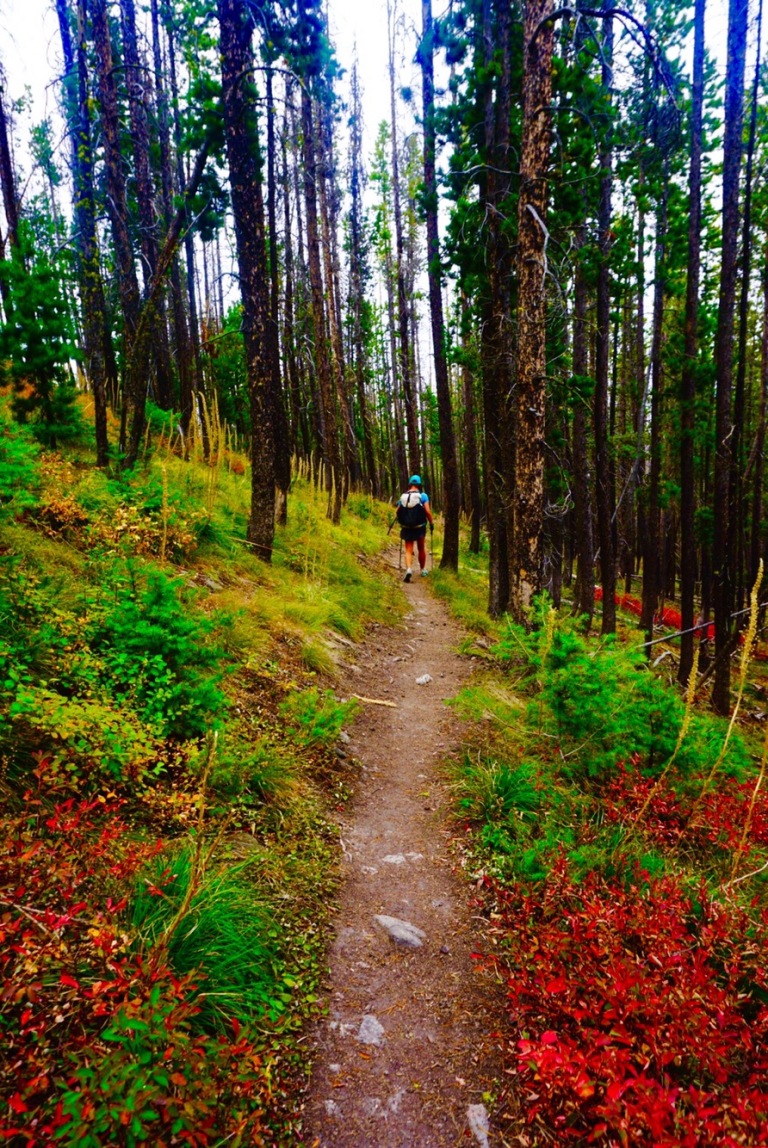 About 1/4 mile of beautiful trail, with red touched underbrush and aspens just turning golden graced us before we were dumped out on highway 200. And there the road walk began.

Yep, it’s closed, just in case you had any doubts.

For me, there’s not much to do on road walks but plug in the phone and zone out. It’s 38 miles to Augusta, and there was no way I was doing it without music. I had thought that we would have to walk 200 all the way to I-15, but a FS guy pulled over and told us about highway 435, a gravel road we could cut onto earlier. As we tramped down the highway, we watched huge smoke plumes billow up, sometimes even seeing the flames. It’s no wonder they don’t want us back there.

Gutpunch and his parent pulled over, giving us each a Mountain Dew – an appreciated sugar buzz. We just squeezed through on the road, as apparently they closed 200 for a bit after we passed through.

Yes, please and thank you!

Another encounter with another FS guy gave us cold water (amazing!), and the goal to sleep under the bridge at Dearborn Creek. The chatter of the creek, and the absence of wind meant the first good night of sleep in a while.

The next morning was a 20 mile walk into Augusta.

Morning on the road.

Once again, it was plug in the earbuds and go. Just as we were nearing town a truck full of hikers pulled over. It was everyone – Sherpa, Wolfman, Dumpling, Moose, Lumber, and Moment. They were heading up to Benchmark – we’ll be behind them for the rest of the hike now. That’s how this trail works, there are so many decisions to be made, especially in the face of all the closures due to fire, and we may never see them again. But it was fun hiking with them for a few days!

Once in Augusta, we started weighing our options. The Bob Marshall Wilderness was open North of Benchmark (with a detour), but we still wanted our continuous footpath. This left one option: a 31 mile road walk from Augusta to Benchmark.

So the following day, we were out of bed and on the road by 5:30. We left everything in town except what we thought we would need for the day – our first experience with slackpacking. We had been told to get out early to catch the hunters going up, but there was no traffic. As we walked along, sometimes stopping (I absolutely don’t want to walk more than I have to) but moving because the morning was so brisk, 6:30 came around. A red Prius drove by, not even slowing down. Just as we were deciding to go back to bed, two guys in a truck pulled over. They were up from Great Falls, were just driving around for the day, and agreed to drive us up to Benchmark. We were lucky they stopped – the whole day we saw one other vehicle come up that way.

The leaves, they are a changing!

The first half of the road walk was much more pleasant than I thought it would be. The road had wound up into the mountains, and we followed along a gravel road, shaded by trees and with a creek right by us. But after 16 miles we were kicked into the rolling dusty valley, and it was back to the trusted headphones. 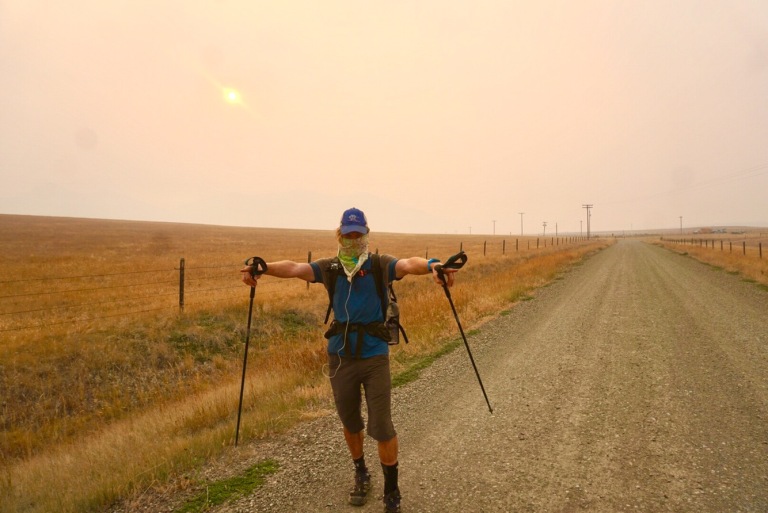 Would you pick up this guy if you saw him hitchhiking?

Finally, just as the predicted storm began rolling in, the first drops of rain falling from the sky, we arrived back at Augusta. Mission accomplished: we still had our continuous footpath. 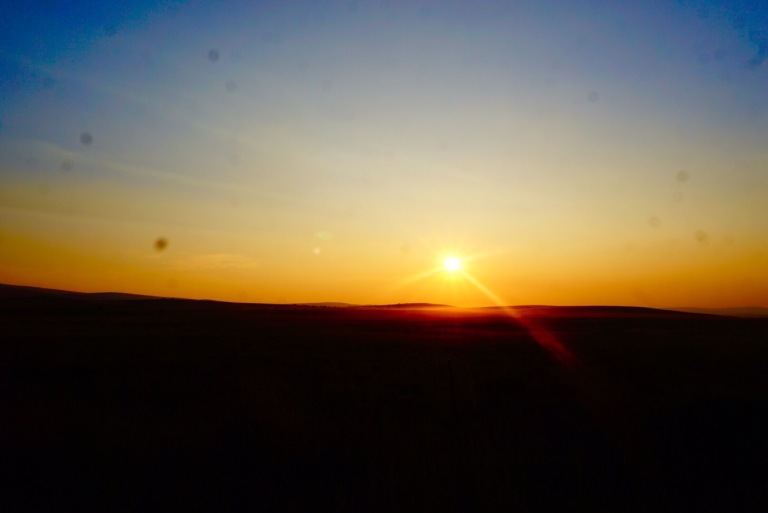 Another blazing sun. Hopefully this storm cycle will dampen this.

One Reply to “Touring Around the Fires”